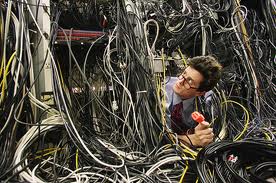 The IFP and Power to the Pixel’s Cross-Media ForumNYC is coming up April 19, and, as it approaches, several of its participants will be blogging for Filmmaker. Today’s first post is from Mark Harris, who will be presenting his new project, The Lost Children, at the event. Click on the link above for more info and tickets.

One of the things that excites me the most about “Cross-media,” “Transmedia” or whatever it is, is the idea of telling a story in many different ways. I know this may not fit into a lot of peoples’ definitions of these terms, but it’s an opportunity, I think.

The "Face" on Mars

When I say telling a story in many different ways, I mean using Stanslavsky’s “magic if” in a slightly different way. For instance, the feature film THE LOST CHILDREN, treats the story of Evelyn Hamilton as a documentary. The events in the film are told as if they may all be in the protagonist’s head, and they may not. The “found footage” model is perfect for a case like this, where we want to audience to interpret what they’re seeing on screen. This is what makes things like UFOs, the “Face” on Mars, “Nessy” so exciting to us. These images that are not clearly distinguishable, so our imaginations go to work and build stories around them. That’s what I wanted in the feature film of THE LOST CHILDREN. I wanted to meet the audience half-way, and ask them to bring their imaginations to the table.

So the feature film makes certain assumptions about the universe the story is set in. But, what excites me about “Cross-media,” “Transmedia” or whatever is that the other platforms you tell a story on, are under no obligation to conform to that universe. One of the things I will talk about at the Cross media forum on April 19th is how we’re going to try having other platforms make entirely different assumptions about the universe of the story. So one platform might assume that it’s all real. Another platform might assume it’s all in people’s heads.

From a storytelling perspective this is fascinating because I am allowed to explore all aspects of a story that interest me. I knew that a feature film only has about 90 minutes and to try to cram every piece of our story’s mythology into that time-frame would do injustice to all of them. So the film is focused very specifically on certain elements and themes, while we are looking to other platforms to explore other elements and themes.

Not only does this satisfy the storyteller in me that doesn’t want to settle for one aspect or another, it also satisfies how I enjoy telling stories. Recently, I was fortunate enough to see Punch Drunk’s “Sleep No More.” Basically it’s a play that takes place through 5 floors of a “hotel”. But the audience is deposited at various places in the hotel and allowed to take in what they want. I spent the whole first hour just digging through drawers, poking in closets and wandering. Then I found a character to follow for a while, then another, and another. The great thing about this is that the audience is made to figure out the story from what they see. I love this. And that’s what I want to do by allowing different platforms to make different assumptions about the universe of the story. The audience gets to take in one, many, or all of the aspects, and work out the “real” story for themselves.

From a business perspective, the success of this model remains to be seen. The idea is that people on various platforms can enjoy the story and get value from it on that platform without ever touching any other platform. So if the sci-fi geek has no interest in the psychology of cult victims, but does want to battle the elusive “Shadowmen” then he/she can do that on the platform that assumes the “Shadowmen” are real and active agents of the Almighty K’Taan here on Earth. Likewise, the person who has an interest in the genuine issues of cult survivors, can explore on the platforms that deal specifically with that. The whole story is made up of all of these aspects.

It’s our hope that by reaching out to various communities with the platforms and themes they are interested in, those platforms and themes can become a gateway to the larger story. And if it doesn’t they still get something out of the story. It’s not just marketing to suck them into the movie. If someone plays the Shadowmen Game “The Missing” and never sees the film, so what? They had fun. We told them a good story.

I know a lot of filmmakers who hate this stuff. My background is more varied than many filmmakers. I come from theater / technology / film. So I get excited about my project encompassing all three. And frankly, I think the barriers between many forms of art are breaking down. I don’t think that means the end of good filmmaking. But it might mean the end of expecting your audience to sit politely in the dark for two hours and take whatever you give them. Personally, I don’t think that’s bad. The whole idea we have about people sitting quietly watching a drama is very new historically anyway, certainly not set in stone.

“Sleep No More” was about the best theater experience I’ve ever had. And I go to a lot of theater. I’ve seen things like it before, but never on this level. But is it theater? Is it a game? Is it a fun house? A theme park? Yes, yes, yes, and yes. And that’s just fine. Because the artists engaged in each aspect did insanely fine work from where I was sitting/standing/running. The lighting, the actors, the sets, all very high quality work designed to bring us into a fictional world. And that’s what really counts, isn’t it?