WATCH TV ON THE RADIO’S FILM, “NINE TYPES OF LIGHT” 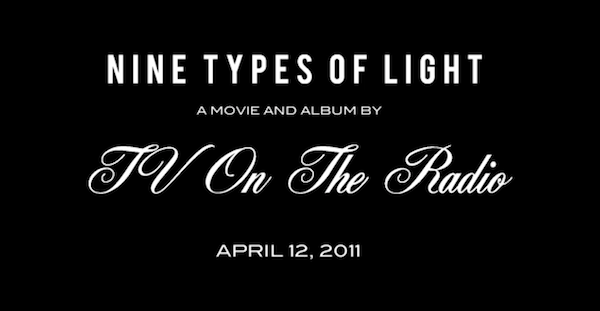 Coinciding with the release today of TV on the Radio’s new album, Nine Types of Light, is a near-feature consisting of a video for each song, all sequenced with an eye towards a longer-form narrative. From the band’s site:

Nine Types of Light is as much an album as it is a movie by TV on the Radio.

The movie is meant to be a visual re-imagining of the record, and includes a music video for every song on the album.

The band personally asked their friends and the filmmakers they admired to help direct the music videos.

Tunde Adebimpe, the director for the full Nine Types of Light movie, storybooked the music videos together with interviews from local New Yorkers on various topics, including dreams, love, fame and the future. Tunde also directed the music video for “Forgotten.”

Some of you will remember Adebimpe’s screen roles, including a part in Jonathan Demme’s Rachel Getting Married and the lead in Joel Hopkins’ indie feature, Jump Tomorrow. The New York Times did this nice video with band members Tunde Adebimpe and Kyp Malone explaining the idea.

Watch the whole movie below.