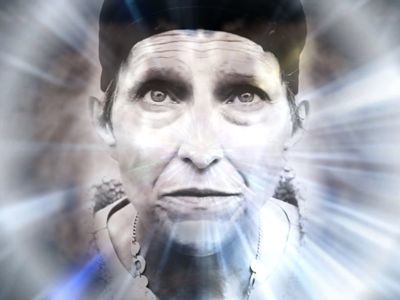 When Filmmaker polled our editors and came up with the 10 Best Films of the ’00s, on our list was Jonathan Caouette’s Tarnation. Ahead of its time in its iMovie-edited home brew of diaristic lo-fi doc footage, Tarnation vividly depicted the relationship of the filmmaker to his memorably unstable mother. At Cannes this year, Caouette is back with his not-a-sequel, Walk Away Renee (pictured), dipping into the same footage trove but augmenting it with new material. This new footage consists of Caouette traveling cross-country to check his mom into assisted living, and sci-fi scripted sequences positing an alternate reality version of these same events.

The film is produced, in part, by Agnes B.’s Love Streams Productions, and Caouette said at today’s Documentary Brunch at the Hotel Majestic that it is an ongoing project to be remixed in different ways. “My experience this year is exponentially different than when I was here in 2004,” Caouette told me. “I’m really grateful that Cannes has invited me to show this film, which is essentially a work-in-progress. Tarnation went through three tiers before we signed off on the definitive thing, and I think it’s going to be the same thing with this. But like that film, this one is kind of a living and breathing thing that’s susceptible to be shape-shifted. Maybe two festivals from now it will be another thing and when it’s finally theatrical distributed it could be something substantially different. Walk Away Renee borderlines more like a video/mixed-media installation piece than anything else. I think it’s just accessible enough at the moment to sit in a theater. I’ve never made a film like this one before.”