The Myth of the American Sleepover — A Hammer to Nail Review

by Daniel James Scott
in Columns, Filmmaking
on Jul 22, 2011

David Robert Mitchell, Hammer to Nail, The Myth of the American Sleepover

It’s easy to be judgmental about the characters of David Robert Mitchell’s teen drama, The Myth of the American Sleepover, about the escapades of several adolescents on their last night of summer. You can judge one girl for betraying her friend for their shared object of affection; or one guy for stalking a pair of twins whom he once had a crush on. But to do so would be to sell the film and its characters short. The Myth of the American Sleepover isn’t about actions and events, but moments and gestures.

Through the impressionable eyes of a handful of youths, we undergo the far-off anxieties of anyone entering adulthood. We witness the unsettling prospect of maturity, inexpressible emotions, small betrayals and large ones, and an underlying excitement in the face of it all.

What exactly happens in that space between 15 and 19? When the specter of college is on the horizon, along with all the aspirations that that entails? Many directors have mined that territory before and returned with interesting results. John Hughes, George Lucas, and Richard Linklater are a few obvious examples. David Robert Mitchell, a first-time director from Michigan, consciously pays homage to each of their works. He offers no palliatives to the angst of being young. Instead he lets the ambiguities of the moments play out.

The Myth of the American Sleepover checks in on several characters in the run-up to their upcoming school year. Among them are Maggie (Claire Sloma), a little pixie looking to charm the local pool boy; Rob (Marlon Morton), an inscrutable alpha male in pursuit of his beloved “supermarket girl”; Scott (Brett Jacobsen) a heartbroken college drop-out hoping to rekindle an old flame; and Claudia (Amanda Bauer), a pony-tailed new girl hoping to mix with the high school in-crowd. If those names don’t ring any bells, it’s because they shouldn’t. Consisting primarily of unknowns, the cast is the crutch of the movie. Every little gesture—an averted gaze, a bitten lower lip, a tentative advance—bespeaks the complexity of their age. Even when the performances are wooden, the actors beg to be considered more carefully.

The film eschews all obvious signifiers of time or place. There are no iPhones or laptops, flat screens or hybrids, just kids riding bikes around the suburbs, hanging out at the community swimming pool, stealing away whatever experiences they can in the remarkable absence of their parents. Rather than debauch themselves in drugs or sex, they look for the small things that any human being looks for: enduring connections, if only brief sparks. 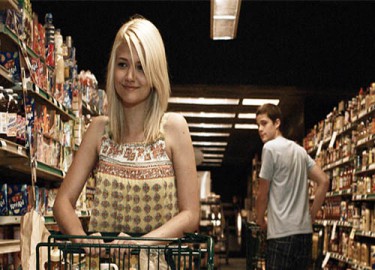 Where they become ordinary, their film becomes extraordinary. The Myth of the American Sleepover is punctuated by stylistic flourishes. Out of the prevailing naturalism come musical montages that place the characters on the same plane, even though they would otherwise be separated by place or their insecurities. Originating from an onscreen source, the music carries to a self-consciously cinematic level, making each character the star of their own movie, until returning to the diegetic source and abandoning them to their realities.

A lakeside swimming party provides the backdrop for the film’s titular moment–one of the few scenes of text in a film full of subtext. High school freshman Maggie sits next to her junior crush on a barge away from the party. The latter sentimentalizes the sleepover days of yesteryear, when board games and freeze tag were viable activities. “There’s something to be said for all the cool stuff you get to do when you were a kid,” he tells her, without a hair on his chest. “You’re sweet. I don’t want you to buy into all the youthful adventure bull shit.”

Placed within an otherwise well-trodden genre, that line carries special meaning.
Filmmaker has partnered with our friends at Hammer to Nail for a weekly “Pick of the Week” post that will be exclusive to our newsletter and blog for a long weekend, at which point it will go live over at Hammer to Nail as well. In the meantime, be sure to visit www.hammertonail.com for more reviews and lots of other great editorial.