Brit Marling and Mike Cahill on Another Earth 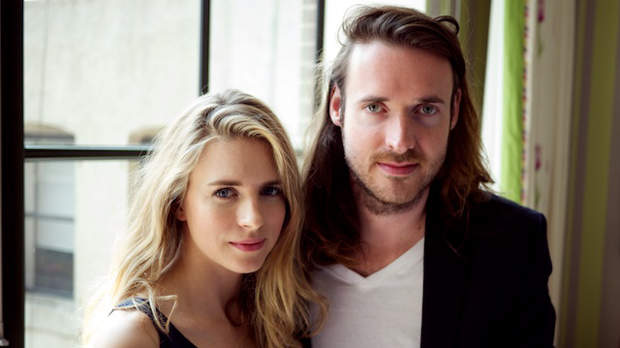 Here’s the beginning of my interview with Another Earth screenwriter/star Brit Marling and screenwriter/director Mike Cahill, pictured here at the Crosby Street Hotel. The film is highly recommended, particularly for our specific readership. Not only is it a good movie, but it’s also an excellent example of how a fresh concept and skillful execution can amplify a tiny budget. Read the rest of my interview in this Summer’s print edition.

Filmmaker: There’s a lot in the movie. There’s the psychology of grief, science, and metaphysics, all wrapped up in the form of a science-fiction fable. How did all of these elements enter the project? What was the idea that you started with, and what layers were added later?

Cahill: I can give you a reference: Krzystof Kieselowksi’s The Double Life of Veronique. A lot of people call this film science fiction, but I think it’s more suited to be called metaphysical. It answers this longing we have to escape the loneliness of the human perspective. No two ways around it: we see the world from our singular POV. No matter how many people we have around us, or how close we are with other people, we were born alone, we trudge through the world alone, and we die alone. This notion of another earth — or another one of you, someone who can share in your history with you, who can feel you deeply — was really fascinating to us.

Marling: We were also really interested in this idea of, as you said, the psychology of grief. Or, what happens when you have a vision for your life, you are so set on a course, you really feel your life is going to be about something, and then [snaps fingers] you are radically thrust out of that? You can no longer be the person you thought you were. How do you come to terms with that? How do you accept the new person that you are? We were preoccupied with a lot of these ideas, but we did begin with the epic concept of, what if everybody here was also there? What if you could talk to yourself? What if you could not be so alienated and alone in your thoughts but could actually enter into a dialogue with yourself? And then we thought: who would that mean the most to? And that’s how we found Rhoda, a girl so utterly alone in her grief, trying to come to terms with what she’s done. The possibility, or the wonder, of finding herself would put an end to that profound loneliness.