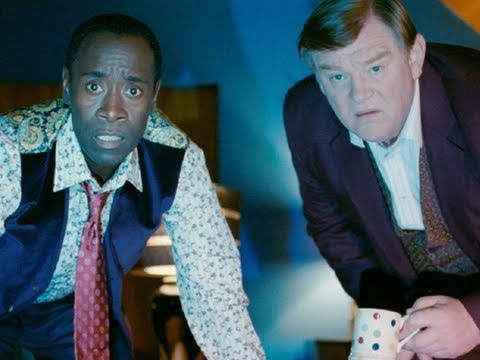 by Brandon Harris
in Director Interviews
on Jul 27, 2011 You’ve seen it all before. Amidst a sea of police corruption, one last honest, wisecracking cop and an improbable sidekick unravel a series of criminal entanglements.They’re an unlikely pair and one of them is surely way out of his natural element. There will be chases, usually with cars, although likely on foot too, and gunplay, half quotable one-liners, and maybe a dash of suspense, although it’s highly unlikely either of our leads will meet an untimely demise. How could anyone possible make a tired scenario like this fresh?

Just ask John Michael McDonagh, brother of Martin, the lauded Irish playwright (The Lieutenant of Inishmore) and filmmaker (In Bruges). His debut feature The Guard, which stars the inimitable Brendan Gleeson as the wisecracking rogue and Don Cheadle as his FBI straightman, sent to the Irish coast to investigate a drug smuggling ring, is a throwback of sorts, the type of politically incorrect, irrepressibly vulgar and side splittingly funny comedy/thriller that many try to make and few execute with the panache on display here. One of several films to screen on opening night at this year’s Sundance Film Festival, where it was acquired by Sony Pictures Classics, the film opens this Friday. Filmmaker: I suspect a lot of films are ruined by faulty casting. Yours falls into the opposite category, that of films that are brought to an entirely new level by the strength of the casting.

McDonagh: I think that films are always won or lost in the casting, before you’ve shot a foot of film. You hear about these projects being announced and go, “God, that’s a terrible cast. I’m not going to see that movie,” but they keep doing it. These studios cast people in movies and you know that they don’t even like them. [laughs] When we put this movie together, because we got Brendan and Don attached quickly, I had no sort of pressure with all the supporting characters, I could do what I wanted. Obviously it helped that Mark Strong was getting a lot of movies at the time too, and I wasn’t getting any pressure otherwise. But you go out and try to get something else made and they give you these lists and it’s just one bad actor after another because the financiers that come up with these lists don’t see movies…

Filmmaker: They don’t even know the actor in question is bad, they just know they’re famous.

McDonagh: They don’t know they’re bad and they don’t know who the new ones are and who is going to break out. A few years ago Michael Fassbinder, he’s in X-Men now, he’d just done Hunger and I’d seen it, but he’s wasn’t on any of these lists. No one knew who he was. Of course now he’s on the lists, but they’re always two or three years behind. They’re constantly out of date, but they don’t seem to give a shit about that. It’s ridiculous.

Filmmaker: To be cast in Hunger, someone like Michael Fassbinder had to be on someone’s radar. He was doing small parts in the U.K.

McDonagh: He was doing small parts, but he wasn’t visible. The minute Hunger came out in Cannes though, he’s on everyone’s list. If you don’t go see movies you don’t know who the up and coming actors are, so I say, “What about this person or this person?” And they’d never heard of them. But they’ve heard of Jude Law! [laughs] “Did you see that last Jude Law movie,” I’d say, and they’ll turn around, “Well that was a shit movie.” But yeah, he’s on your list!

Filmmaker:  [financier voice] Do you think if we cast Jude Law we can have dinner with him? [laughs] So did you hook up with Brendan through your brother?

McDonagh: Well I’d met Brendan. We had a boozy night out at Sundance when In Bruges screened there, but I didn’t really know him that well. Martin [McDonagh] got the script to him. See, that’s how Martin gets an executive producer credit. [laughs]

Filmmaker: He sent one e-mail. [laughs]

Filmmaker: Most lucrative e-mail ever. Good gig while you can get it.

McDonagh: It might have been 10,000 sterling, which would be a bit more. He basically handed the script off and got paid 10K for it. But Martin’s connection to the film in some ways is, “If you like In Bruges, you’ll like The Guard.” He mainly helped in that way. So Martin sent him the script, and I think Brendan read it within 24 or 48 hours and said he wanted to do it. Then we sent it out to Don. Don was my first choice as well. You know all these directors say, “So and so was my first choice” — yeah, right. But Don was, you know. I loved him in The Devil in A Blue Dress.

Filmmaker: He’s so great in that.

McDonagh: You know, what I like about that is that you have friends like that who eventually you have to stop seeing because as soon as you go out they get you in a fight. But they’re loyal as all hell.

Filmmaker: Exactly. You want them in the alley with you when the fight does start, but you don’t want to go out with them because they’re going to start the fight.

McDonagh: Yeah, but then after a few years of that you’re like, “I don’t want to go out now and get into a row with someone for no reason.” [laughs] The scene for me in Devil is when he’s drunk and he gets woken up-

Filmmaker: He’s still got the gun in his hand.

McDonagh: Yeah, yeah and you’re like, “is he gonna kill him or what?” [laughs] so I loved him in that and I loved him in Boogie Nights. Whenever I saw him interviewed, he had a real sort of warmth and a sense of humor, and I don’t think you can fake that.

McDonagh: Very sharp. I didn’t realize it at the time, but he’s done all those things for Funny or Die. So Brendan said yes immediately and Don had already been sent it, I think, and by the time he was about to read it he knew Brendan wanted to do it. He liked Brendan as an actor so he read it quickl. I had to go out to LA and meet Don and he said, “I’ll put Creshendo [Productions, Cheadle’s production shingle] behind it to try to bump it up a little so when you go out to actors and financiers and everything they’re going to read it straight away instead of being at the bottom of the slush pile.” So I wrote it really quickly, right around Christmas of 2008, it went out in March, everyone said yes and we were in production in September.

Filmmaker: It all happened very quickly.

McDonagh: I’d been trying to get the film I wrote before this made and I spent seven or eight years trying to get the previous one going. So, yeah, this all happened very fast. You always think something is going to happen. It’s going to go away. Even when you’re in pre-production in the office you’re sitting there thinking, “Is all the money going to come through?” It’s not until you’re out there on the first day of shooting that you’re like, “Shit, we’re going to do it.”

Filmmaker: Watching it again I kept thinking about how it has this tangential relationship to the interracial buddy cop movie cycle that probably began with Lethal Weapon and ended with, I don’t know, Rush Hour 3. [laughs]

McDonagh: More than Lethal Weapon. It’s akin to something more like Freebie and The Bean from the ’70s, something that’s more anti-authoritarian. The villains were always these corrupt cops who were the bosses of these schlubby cops, so it has this more anti-authoritarian aspect. It was this period in American life where there was this pervasive sense of disillusionment — the Nixon years where everything’s gone wrong, that sort of thing.

Filmmaker: Corruption was seen as endemic. From the top of society down, at all levels of society.

McDonagh: Yeah. In this, Boyle is about the only non-corrupt cop in that part of Ireland. Watching the film again, you see it so many times, the scene where he says, “I’m not going to investigate the murder of the drug smuggler because it’s my day off.” [laughs] It’s quite strange because you expect the two of them to get together and solve it together, but then the whole middle section of the film —

Filmmaker: They’re doing everything in their power not to work together.

McDonagh: They veer away from each other. It might be frustrating to the audience the first time they watch it, but I think once they realize where it’s going it seems more original somehow and more enjoyable. The veering off of tangents, it happens quite a lot during the film. When Everett goes around the countryside in Ireland, he discovers nothing. [laughs] It doesn’t lead to anything, he might as well have not bothered. They get a clue by sitting, drinking in a pub, looking at the closed circuit TV. There is that sort of veering off the whole way through. Liam Cunningham, he gets distracted when they’re in the diner by what song is playing. In a way, I guess it’s me as I’m writing saying, “What would be funny and would have I not seen? What’s the opposite of what those kind of buddy cop movies do?” Then I’d try to flip it. The problem you have tonally is then it’s veering all the time and you kind of have to pull em’ back for the third act. Villains in movies, they always want something, whether it’s world domination or money or drugs; well what’s the opposite? Its a villain who’s so bored [laughs], he might as well be a clerk in an insurance firm.

Filmmaker: It’s funny because with Mark Strong’s character, there are times when the movie seem to be primarily about his depression. [laughs]

McDonagh: We could sort of have a prequel about how did he become that person, what led him to into this life, you know?

Filmmaker: It’s rare for someone to write a comedy in which the villains and secondary characters have what are arguably the funniest lines.

McDonagh: You know it’s funny, sometimes you get criticized for having too many witty characters. Back in the ’30s and ’40s, good screenwriting was all about smart characters saying smart things.

Filmmaker: With a ringing pace to it.

McDonagh: Bang, bang, bang. That all seems to have gone now. Characters in movies, even the heroes, can’t be too intellectual, can’t make obscure references. I just sort of wanted to get away from that. Part of that is you’re sitting alone in a room bored, so you’re trying to amuse yourself as much as anyone else. The Mark Strong character, he’s happy in a way to die because it’s like finally something exciting has happened! [laughs] He’s facing somebody who’s relatively honorable for a change, so it’s kind of like a happy death for him. You’re just always trying to find ways not to do something the usual easy, cliched route basically, but the idea that characters in movies can’t be too witty all the time is just ridiculous. I think a lot of that to be honest is from, not to pick on movies from the U.K., but the Ken Loach and Mike Leigh type movies. I’m from a working class background, and a lot of those movies are about working class people who never say anything intelligent. They’re just shouting at each other. I don’t like it. It just bores me.