The Sundance Creative Producing Lab just wrapped, and here, with an account of her days there, is producer Melissa Lee (Dear Lemon Lima, Circumstance). 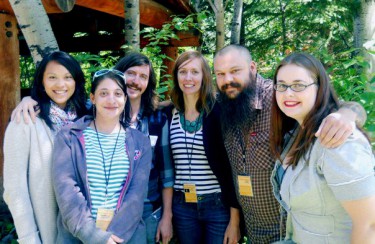 Last week I had the honor of being one of six Fellows at the Sundance Institute Creative Producing Lab. Over the course of five days, the intimate group of Fellows and Advisors – about 15 in all — dissected, scrutinized, and re-energized not only the five projects selected for the Lab, but also each of the Fellows behind them. I’d heard the experience compared to rehab, group therapy, and King Arthur’s Court. It turned out to be a bit of all three.

I almost didn’t apply to the Lab this year. After two consecutive rejections, I wasn’t sure my bruised pride was up for a third. ut the same pride also told me that was a pathetic excuse. Now, I’m really glad I listened.

My Lab project is The Maglev Story, written and to be directed by Anthony Ng who, since his feature debut at the Sundance Film Festival in 2005, has been working successfully in the commercial world. The Maglev Story marks his return to his first love: features.

The Maglev Story follows a Japanese “hikikomori” shut-in boy who leaves his room—for the first time in two years—in search of his mother in Shanghai and, in the process, forms an unlikely bond with a brokenhearted Chinese girl. In the tech-driven age we live in, these two souls are not looking for love; they’re just seeking a real human connection.

As an independent producer, I spend most of my time working in my own bubble, so the opportunity to share my project with a group of phenomenal Advisors is as much exciting as it is terrifying. Moreover, the dedication and commitment of the Advisors is above and beyond the call of duty. We may be stowed away in the idyllic grounds of the Sundance Resort for the week, but the demands of the real world continue outside, and yet the attention the Advisors nurture us with never falters.

I arrived at the Lab with what I thought were the first semblances of a strong project package: an original script, a talented writer/director, and a Sundance Film Festival award-winning producer. But the glossy façade of my project quickly fell away, as the Advisors posed challenging questions and deftly poked holes in my defense as large as Pollock splats. How was I going to make it through the entire Lab, when we were only on Day 2?

At the end of the day however, the Advisors reminded us why we were there. We were largely there because at the core of each of the five projects selected was a great story. And what I was learning in the safety of the Lab was only going to enable me to make my story even greater. I had to stop viewing each comment and question as a step back and, more appropriately, as a thoughtful, informed step forward.

We were joined for the first two days by writer/directors, Braden King and Josh Marston. In addition to screening their latest films, they shared with us their insights on each of our scripts, and spoke to the importance and nuances of their director-producer partnerships with Advisors Jay Van Hoy and Paul Mezey respectively. Sure, the Lab would cover some of the more concrete challenges of producing—financing, legal issues, pitching—but the softer quality of fostering relationships is a harder lesson, and it was a privilege to hear each duo speak to this with complete candor. The presence and input of Braden and Josh provided yet another valuable dimension to the group discussions and one-on-one meetings that made up our daily schedule.

Over and over again, we were reminded of the importance of strong relationships, communication, and creative collaboration. After screening Winter’s Bone, writer/producer Anne Rosellini and Advisor Alix Madigan shared their experience of working together and how they complemented each other’s strengths and weaknesses. Yes, they actually have some.

By this point in the Lab, I had been forced to look my project squarely in the eye and articulate not only its strengths, but its shortcomings (this is the group therapy part). The one-on-one sessions gave me an opportunity to work through my own specific questions with an Advisor, but quite often it was the group session in which we listened and spoke to other Fellows’ issues that brought about, for me, some of the greatest revelations. When another Fellow brought up the subject of sales agents during our group Strategy conversation, Advisor Amy Kaufman challenged him to define exactly what a sales agent would mean to his project. What value does one add? Does it make sense for your project? At what stage is it helpful to bring one on? You know at that point every other Fellow is applying the same questions in their head to their own situation. And we might not know the answers immediately, or the next day, or the next week. But we know that a few months from now, if a question still persisted or arose, the Advisors would only be an email or call away.

The Lab forced me to ask questions of the script, of the project but, more importantly, of myself. Moving forward won’t be easy. But I left the Lab knowing that I now have a community of support—my very own trusted Knights of the Round Table—to help me on my way. — Melissa Lee