AND THE BEAT GOES ON

by Howard Feinstein
in Filmmaking
on Aug 5, 2011 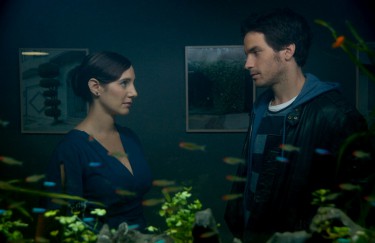 Matias Bize's The Life of Fish

“This year’s program captures how eclectic and varied in genre and style Latin American cinema has become,” says the Film Society of Lincoln Center’s Marcela Goglio, who, along with colleague Richard Pena, programs the films that play at the Walter Reade Theater during the 12th edition of Latin Beat (August 10-24). “In spite of ongoing financial struggle, good commercial films coexist with low-budget and more experimental ones.”

Even though it is the oldest of all, Latin Beat has not received its just due in a community that hosts so many mediocre Latin American and Latino film festivals and exhibitions. (Check out the Havana Film Festival New York and the New York International Latino Film Festival, if you’re in doubt. And just to pose a question: Is there a high enough percentage of quality films coming out of any one Latin American country to justify a New York showcase of recent releases every year?) In spite of some skimming off the top for bigger festivals (New Directors/New Films, Tribeca, the New York Film Festival), the 23 movies screening this go-round are really quite good, a testament both to the curators’ tastes and the fact that there has been over the past 10-15 years so much fine product coming from the South. These countries don’t generally support one another’s cinema, so the increasing quality of Latin American films is not a function of a unified continental movement. Perhaps this series itself, with q & a’s and one large panel, might reveal some of the underlying forces at work.

Among the lower-budget films in Latin Beat is Norberto’s Deadline, the directorial debut of Uruguayan actor Daniel Hendler (best known abroad for his work with Daniel Burman). As a filmmaker, Hendler is of course an unknown quantity, whereas other, more experienced Uruguayan directing talents have international name-recognition, among them Pablo Stoll, Federico Veiroj, Adrian Biniez, and Manuel Nieto Zas.

Like Norberto’s Deadline, their films feature schlumpy but likable protagonists, storylines close to the directors’ personal lives, actual locations, and a precise shooting style, comprised of relatively long takes set up a bit obliquely—not symmetrical, but not expressionistic either. All are made on the cheap; forget CGI. These films are, by default, anti-glamour and anti-Hollywood. A cabal? A wave? Listen to the Beat. Featuring a movie like this proves that the programmers of Latin Beat have their hands firmly on the pulse of Latin American cinema.

The eponymous character in Norberto’s Deadline is a married man incapable of faking passion for mindless jobs. He feels pressure from his wife and from pals who he owes money. At night he takes drama classes, and, lo and behold, finds his calling. In this reversal of thespian-turned-director Hendler’s own experience, he transmits the joy of performance as only someone with firsthand knowledge can. Hendler has proven himself to be one of the few actors anywhere to successfully make the transition to directing.

You can’t get much more low budget than a student film, but Spaniard Marta Ferrer’s Mexican production El Varal is a real discovery. Here Latin Beat wisely nods to the recent upsurge in excellent Mexican documentaries. Ferrer immersed herself in a rancho, a small rural community in the plains of central Mexico. Options for earning a living are few. Some residents work the land or labor in one of three new maquiladores (assembly plants), where conditions are horrid. A high proportion of the inhabitants, however, have migrated to the U.S., and their earnings sustain their families back home. Sadly, their absence creates a void in the town’s spirit.

Ferrer films the celebrations during the community’s patron saint’s day, then follows the participants as they return to the drudgery of tilling the soil, sweating in the factories, or just hanging out in the street. Here one sees the terrible damage perpetrated by NAFTA on small agricultural producers while large transnationals reap huge profits. In spite of these harsh observations, the film is beautiful and poignant, respectful of the locals and their attempts to maintain a semblance of dignity.

Probably the best of the commercial films is Argentine director Miguel Cohan’s No Return, a tight, no-nonsense psychological thriller with some inspired script detours that function effectively, in large part due to excellent performances from the two principals. Someone who should have had an astrologist plot out his every movement, a twentysomething cyclist is struck down at night—twice, by two different drivers we have already been introduced to.

The first is a dashing, high-energy ventriloquist, Federico (Leonardo Sbaraglia), who doesn’t hurt the poor guy but destroys his bike and nearly engages him in a fistfight. The second driver is high-schooler Matias (Martin Stipak), a nice but lily-livered kid who flees the scene when the cyclist goes down. With the support of his parents, Matias refuses to own up to the incident. The unlucky fellow dies, his elderly father is inconsolable, and Federico goes to prison.

The film has a second, less manic act, which begins three-and-a-half years later, just after Federico is released from prison. The experience has transformed him into a lethargic lug, but one with enough obsessive energy to conduct a mad search for the real culprit. Matias has graduated and works as a manager in his family’s construction business. No longer a teen, he is for us much less sympathetic than Federico, and Cohan deftly manipulates our empathy toward the one who was imprisoned. It’s very Hitchcockian: the trap of a false accusation. Without giving too much away, let’s just say that what happens when the two drivers meet is brilliantly executed, unpredictable, and unsettling, and we are as much witnesses to it as the victim’s old father. Cohan will be present to introduce the film.

Proxemics is a fancy word for spatial relationships, a pre-hip, western form of feng shui. For me, the best of this year’s films have as a common denominator an approach to space that is specifically Latin American, especially in comparison to that found up north. The term baroque has many applications, but in these films, what is most baroque is not only the configuration of space on a flat screen, but also a creative elaboration of their third dimension.

The most striking in spatial terms is Argentine director Gustavo Taretto’s Sidewalls—Latin Beat’s opening nighter, which the filmmaker will introduce–ostensibly a two-hander belonging to the internet-compatibility genre about a neurotic couple destined to meet, but which really stars the metropolis of Buenos Aires itself. We are first introduced to the fabled city with a series of shots of buildings, but not the famous Art Deco or palatial structures, rather those in more typical—and more rundown—neighborhoods, like Barrio Norte, where Sidewalls takes place. The conceit here is that the architectural sphere provides a commentary on urban alienation in general, and on one lonely young man and one lonely young woman in particular.

Martin is a website designer who works at home and is rather disengaged from conventional interaction, even when making love. Mariana is a beautiful architect wannabe (not coincidental) who makes her living designing store displays. The analogy with the cityscape is that each lives in a shoebox apartment built against sidewalls, those large expanses of exterior surface that possess no ornamentation, and at best huge advertisements that bear little relationship to pedestrian scale.

Both Martin and Mariana seek a way out of their social prison by poking small windows through these horrid boundaries, letting in air, sun, and, over the course of the film, each other. The movie is exceptionally well directed and acted (by Javier Drolas and Pilar Lopez de Ayala), but its origin as a short six years ago is evident in the distracting degree of filler material, especially a completely gratuitous cross-cut sequence of their lighting candles after a blackout, and a silly faux-music video at the end.

Space is much more constrained and controlled in The Life of Fish, by the highly gifted Chilean filmmaker Matias Bize. Already in In Bed, set in a single motel room almost in real time, he showed a propensity for confined sets as tools of character revelation. That film, however, was dynamic in its own way, with the camera panning and panning so that there was the simulation of an action film (or at least fast-moving porn). The Life of Fish takes place in one home, at a birthday party. Bize not only cuts much more frequently, but he steadily follows with a handheld camera his expat central character as he snakes his way through the structure, and through the guests who had been most dear to him before he abandoned the city of Santiago 10 years before.

The title comes from the aquarium through which Bize occasionally shoots the handsome, globetrotting travel writer, still-single Andres (Santiago Cabrera), when he is talking to the most significant of the people from his past, his ex-lover Bea (Blanca Lewin), now married, pregnant, and the mother of twins. The film is in no hurry pushing them toward a more intimate communication. The moment of reckoning arrives: Will she leave with him? Like much of the film, the climax is conveyed through glances and tiny gestures, not exposition. Bize is a master stylist, and his use of backdrops, color, and lighting creates the ideal context for their back-and-forth dance. Artifice rules here, but then, Latin Beat is that rare exhibition, inclusive without shrieking, “Market!”