Project Nim vs. Rise of the Planet of the Apes 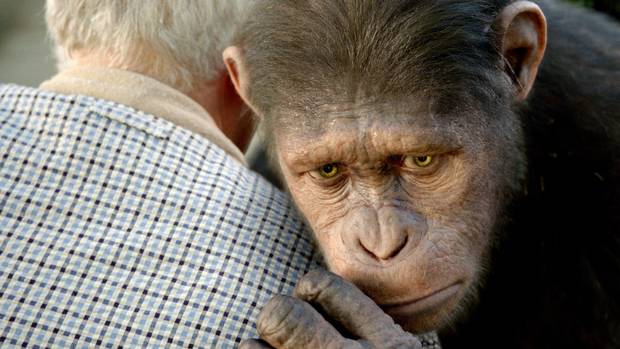 Project Nim, Rise of the Planet of the Apes

After watching Project Nim, the first half of Rise of The Planet of The Apes is like seeing a documentary (albeit a high production one starring James Franco). Or maybe it’s more accurate to say it’s like seeing the Hollywood-cast, fictionalized version of Project Nim, starring a remarkable digitally-captured performance by Andy Serkis as Caesar, our heroic chimpanzee; our Nim. Of course, like any good Hollywood adaptation of a documentary, halfway through Rise of the Planet of The Apes, the plot veers off from that of Project Nim into a more satisfying conclusion for the apes. Caesar is able to do what we root for Nim to do, but know from the start, he will be unable to, and this knowledge crushes us, as Nim’s story gets darker and darker. The second half of Rise of the Planet of the Apes is a marriage between Hitchcock’s The Birds, and the original King Kong. Who doesn’t want to see apes wreaking havoc on the Golden Gate Bridge, or a chimpanzee riding a horse? One commonality at the conclusion of both films: Neither film makes one proud to be human.