by Jason Guerrasio
in Sundance Responses
on Jan 19, 2010 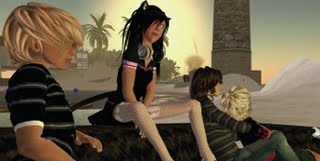 Do I need permission to film that person? In my previous documentaries, the answer was always clear: get a signed release form. But this film was set in a different world: a virtual world called Second Life, populated solely by digital avatars. Was this a game or a place governed by the laws of the real world? To make things more complicated, most “residents” (as the users call themselves) fiercely guard their real identities, adopting fanciful new names, ethnicities, nationalities, genders, even species. Asking for a resident’s signature and real name often felt like trying to unmask a CIA operative. It was soon clear that I needed some ace legal advice. I contacted an attorney at the Electronic Frontier Foundation who recognized this as novel legal territory and offered to take on my film pro bono. Ultimately we made an interesting decision, with the goal of notifying as many people as possible about my intent: My avatar would carry around a virtual video camera and wear text that signaled I was making a documentary. If anyone clicked on me, they’d get a description of who I was, how the footage would be used, and a way to opt out. I also did my best to seek explicit permission via text chat or, when an avatar was prominently featured, digital release forms. Even if the person would only sign as “Decomposing Monster.”