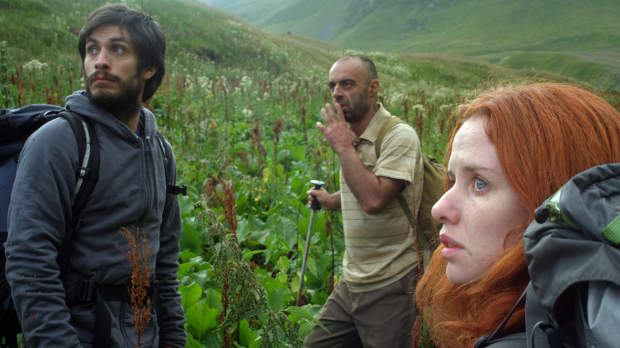 by Scott Macaulay
in Directors, TIFF, TIFF Features
on Sep 12, 2011

With The Loneliest Planet, the follow-up to her acclaimed feature Day Night Day Night, writer/director Julia Loktev builds a piercing drama around the contrast between a beautiful wide-open landscape and the ugliness of a momentary, possibly reflexive, moment of human behavior. In the film, an adventuring couple (Gael Garcia Bernal and Hani Furstenberg) trek through the Georgian mountains with a for-hire guide (Bidzina Gujabidze). A violent encounter changes everything. But in Loktev’s world, the hurt comes not from gunplay or kidnappings but from something more subtle. We asked Loktev about the relationship of landscape to story, about silence, and about the progression of her filmmaking.

Filmmaker: The Loneliest Planet deals with the dynamics within one couple’s relationship. Are these dynamics a product of the extreme situation they find themselves in, or are they fissures you think exist, perhaps unseen, within couples in everyday situations?

Loktev: The central rupture in the film is something no woman wants to imagine the man she loves would ever do, could ever do. The rupture happens at what might just be the happiest time in this couple’s relationship. They’re in love, they’re getting married in a few months, they’re traveling, which may be the thing that brings them closest together. So the rupture is not an extension of building tensions, but a sudden stark interruption of all that came before. It really comes out of nowhere and throws them off course, off balance. At the same time, to look at your question another way, I suppose it is a kind extreme version of what happens in relationships every day. A microscopic gesture, possibly unintended, quite likely unintended, a small misstep, and suddenly you feel unloved, suddenly everything shifts.

Filmmaker: You scouted various locations before shooting in the Georgian mountains. What was specific about this location for you, and why there as opposed to another locale?

Loktev: I was born in Russia, so I grew up with this mythical image of Georgia. Georgia was the vacation paradise, the jewel of the Soviet Union. My mom trekked across the Caucasus when she was in university, and I remember pictures of my parents traveling in Georgia before I was born. At the same time, most people don’t have a preconceived image of Georgia, and this was very attractive to me. The tourist industry in Georgia is still in a nascent stage, so interaction between tourists and locals is not so clearly bound by commercial roles. You still have a chance to meet people, they might buy you a beer, you might get invited to someone’s home, etc. Alex and Nica specifically seek out this type of travel, rather than going somewhere like Thailand. And then there is the landscape, the mountains. They really are unlike any mountains I’ve ever seen, and I spent the second half of my childhood in Colorado, so I’m kind of a mountain kid. It’s almost a science fiction landscape. These mountains are huge, yet they’re soft and lush, covered with emerald grass, veined with orange minerals. There are no trees, so the space is enormous and open. There’s nowhere to hide.

Filmmaker: What role does silence play in the film?

Loktev: Sometimes a small physical gesture, the way someone moves, or doesn’t move, can mean much more than anything they could ever say. After the incident, the couple is unable to talk about it. They have no idea what to say. What can you possibly say in this situation? Besides, they have no space to talk really, since they’re never alone, they’re always with the guide. So they communicate with these little gestures, gestures that might otherwise be meaningless, but that suddenly come to mean everything. They take turns trying to close the space between them and pulling away.

Filmmaker: In your previous film you deployed a conceptual approach to the cinematography, shooting the two halves of the film is markedly different ways. Was there a conceptual strategy at work in terms of the shooting of this film?

Loktev: For me the big question was how to tell this very delicate intimate story in the middle of an enormous landscape. I didn’t want to resort to the tropes of “landscape films,” so, for example, instead of going widescreen, we went with a 1:66 aspect ratio, which sort of closes our characters in from all sides. The landscape becomes as much vertical as horizontal. We also used old Soviet Lomo lenses to give the film a kind of softer, more fairy-tale feel. I tend to have a very specific sense of composition, and the challenge was how to have these very precise compositions that are constantly being recomposed as the camera walks alongside the characters. The camera here is in a constantly moving relationship to the three characters and the landscape, which is kind of a fourth character in the film. Some of our shots were four to seven minutes long, and the camera operators were shooting while literally hiking with the actors, up and down hills, over rocks, over a packed avalanche etc., so it was quite a physical feat.

Filmmaker: What changed in terms of your approach on this film as opposed to Day Night Day Night?

Loktev: I tend to crave very extreme changes of physical visual context between films. Moment of Impact was locked almost entirely in a claustrophobic domestic space. So for Day Night Day Night, I went to the opposite extreme, the city, the middle of Times Square. Now with Loneliest Planet, I went to another kind of extreme, the middle of the mountains. After Day Night Day Night, which focused on one girl and her relationship to her unnamed faith, it was also quite exciting and new to work on a film about three people in relation to each other, to be able to explore the minute shifts and slips in these relationships. Although I was quite disturbed to realize both films involve people walking around with backpacks. I’ve promised myself, next film no backpacks.