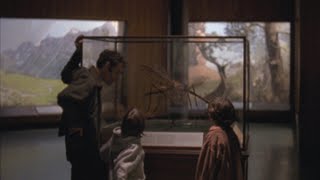 Jeesh, the amount of decisions that go into making a movie… the words “the amount” are so heavy because the list is heavy, breathing is a decision, but to quantify them seems like the scariest task with such a daunting overhead. Of course the best decisions are the ones that you don’t have to make but are forced into. During Daddy Longlegs, we were so preoccupied with constantly providing stimuli from the writing process all the way through editing: for ourselves, for the actors, the non-actors, the producers and ultimately the film.

For some reason, during one of the first all-encompassing scenes with the children, where we expected very specific actions and emotions from them, we forgot about this concept (of letting the stimuli direct the film and always be humbled by it). We embarked on our first real scene in this apartment we had been working on for months (another important decision was to allow the apartment set itself be the only real outlet for sentiment, which we did with production design by filling it with emotional baggage: a museum of New York childhood sentiment and of our fathers). The scene involved introducing Lenny’s girlfriend to the kids in a loving way. Our strategy involved a tablecloth scarf and a live lizard hiding and slowly dying in a Petri dish within a resealed box of Lucky Charms. What we hadn’t planned was the clash of adding a woman or an outsider to the intimate stimulus we had been building from day one. We forced the kids to forge this ridiculously unhealthy relationship with Ronnie where he was having fun and playing games 24 hours a day. The thought had never crossed our minds that adding a girl to the scene was the equivalent of killing the sleepover.

Needless to say the kids revolted and the scene was thrown to the wolves. We tried to save the original idea by telling them how they should react, but we got wooden performances, and we weren’t making Pinocchio so it was a problem. The problem wasn’t a lack of stimuli but our underestimation of its power. We should have rolled with it and instead we tried to stand above it from a safe place. We tried to direct the kids with our mouths. To tell them what they were doing. We forgot!

Before the lizard was out the box (literally), we knew we had to stop. The scene was trashed; we cut and didn’t shoot anything that day. Instead we all hung out and watched some of our old VHS tapes and ate dinner. That night we sat down with Ronnie and Eleonore and replanned that complicated scene, this time with chapter marks highlighting different actions Sage and Frey (the two children in the film) may or may not do, according to what was thrown at them. What was so unique about this sit-down was that this was our first attack plan that formed out of a failed attempt (not a rehearsal but a burnt film attempt). It was the product of a fresh decision to not shoot a scene through and stop before the nuances were out in the open.