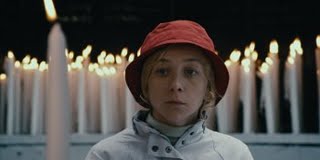 For Lourdes the hardest decision was whether to make the film at all. This decision was so hard because I found the subject very ambivalent and difficult to treat. I wanted to tell a story like a fairytale but I didn’t want to make a naive film. I wanted to question religion and faith but I also really wanted to know and learn more about both without, on the other hand, being too soft with the Catholic Church. I wanted to make a film in Lourdes that talks about a miracle without pretending that God exists and that he is a good man. But I also didn’t want to exclude the possibility of God’s existence and judge the Catholic religion for selling God’s ideas. I wanted to tell a more general story about the longing for happiness and it’s decay. I wasn’t sure if it could work — if the film would be too friendly towards the church, or too atheist towards the miracle. I myself am not a believer, but I once was one. Would I have enough distance to be able to tell this story? I finally decided to make the film — it was much due to Sylvie Testud. She brought a dry sort of humor into her role, which helped me to find the tone to tell the film. The difficulties in making this decision finally helped the film to become what it is now. It shows different aspects and doesn’t really judge. That was hard enough!