“ONE TOO MANY MORNINGS” | co-writer-director, Michael Mohan

Michael Mohan, one too many mornings, Sundance Film Festival 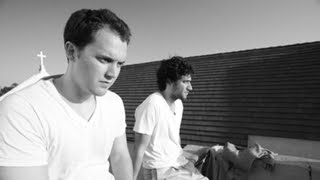 The hardest decision we had to make actually happened prior to shooting. During 2007, my team and I had been commissioned to write a horror-comedy script. We had been working on the script for many months and actually had the budget to make it. At this moment, we were on the verge of going to our bosses and trying to figure out how we could take leave of absences from our jobs to go film this movie in the late summer.

At the time I was working in the Sundance Feature Film Program — the Screenwriting and Directing Labs. I wasn’t one of the directing fellows. I made copies. But it was still incredible; it was like auditing the most intense grad school. As part of the Screenwriters Lab, Stewart Stern (Rebel Without a Cause) leads this life-changing workshop about writers’ personal connections to their work. It’s really heavy: His philosophy is that we’re all defined by the sum total of our experiences. And as a writer, you need to acknowledge and share those experiences so that your work is wholly unique to you and your audiences.

During that workshop I had a miniature crisis where I realized that while I was intellectually invested in this story, I wasn’t emotionally invested. And in staring at this long year ahead of me, knowing that I was going to pour as much of my life into this project as humanly possible, I decided that I would rather not make a movie at all than tell a story that wasn’t me.

So we pulled the plug. My team and I regrouped in the late summer, knowing we could have been on set at that very moment. We were “this close” to making our first feature film, and now we couldn’t be further away. We had nothing. So we sat in a room, looked within ourselves, and wrote. It was the best decision we could have ever made.