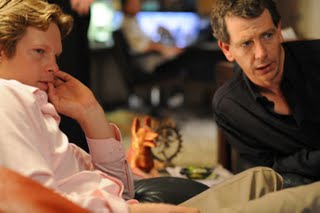 Casting 17-year-old James Frecheville in the lead role. He’d never done a movie before; he was just one of 500 kids who came to a massive open casting. He was bigger and tougher than I’d ever imagined the character being and he was going to have to sit at the center of a big ensemble cast of some of the best and most intimidating actors in Australia. If he didn’t work, the movie wouldn’t work. But something about the natural detail in his audition performances just made me want to cast him. And the more I thought about him in the role, the more the movie made sense: What was sad about this character was not that he was a little fragile kid in a dangerous world, but that he was like a man-child in this world — big, naive and lonely. It made sense that he might find himself involved with hardened criminals but way out of his depth at the same time. And so we took the plunge, gave him the part on Christmas eve and every day during the shoot he surprised me. I could direct him the same way I could Ben Mendelsohn or Guy Pearce or Jacki Weaver. And never during the edit did I feel like we were having to cut around him to build a believable performance.

Casting Jimmy felt like a hard decision at the time, a scary decision. It almost felt like we had no other options. But then very often that’s how the No. 1 choice presents itself to you — it makes you feel like you have no other option.