Our innovation is stagnant. Stagnant and boring. Really. Boring.

The movies themselves are one thing having long been locked into a race to the bottom with their Hollywood counterparts in an often times futile effort to just be noticed, but most stagnant and boring is the proliferation of new ‘platforms’ on which filmmakers can ‘launch’ their careers. Everywhere I look there is some new upstart looking to get into the digital distribution realm touting how their platform puts the power in your hands and provides a direct gateway for your film to reach an audience. A claim which, of course, begs the question, “what audience?”

Yes, the internet is a grand and amazing vehicle to get your work seen, but in reality its promise is akin to the phonebook being a vehicle to see your name in print. Just because you can put your film on Facebook, stream it on YouTube, or even give it away via P2P, doesn’t mean people will seek it out and/or watch it. If nobody is looking for you then nobody is looking for you and the new platforms emerging to date, in and of themselves, are not truly assisting you in tipping the needle beyond obscurity and toward sustainability as they themselves have yet to attract the very thing you’re looking for… an audience.

Contests. Gimmicks. Audience engagement tools. Interactive. Cross platform. Wheel-spinners, all. There is not one single emergent platform that appears to ‘get it’ evidenced in large part by their primary marketing push being directed at the filmmakers and not the end user, and accentuated by the fact that many times their technical approach outweighs and/or inhibits the overall user experience.

Quantity, when it comes to strictly-independent, low budget, off-mainstream film, does not attract. Technological wizardry does not attract. Gimmicks are usually non-starters, interactive and cross platform come off as convoluted, and I as audience member will decide how I want to ‘engage’ thank you very much. Bottom line, if you have to explain it to me then it doesn’t make sense, and if your primary market is an audience of filmmakers and not the average media hungry internet user you’re not helping the filmmaker.

It’s easy to recognize that we are witnessing a time of great experimentation, and as with most experiments we are bound to witness a cascade of failure. In this case though, some of the failure seems like it could be averted if we stopped looking down the wrong end of the lens. Platforms, no matter upstart or Netflix or Hulu, are not the star attractor as evidenced by Netflix’s current troubles. As platforms, they have the potential opportunity to curate vast amounts of films, tv, and all the stuff we now define as ‘content’, in an easy one-stop-shop environment with simple to understand interaction and low-cost transactions, but if their overall offering isn’t cool, quality, or what you’re looking for, why spend any time with it?

This leaves every new platform directing their attention at the independent filmmaker market in a chicken/egg quandary. The independent filmmaker marketed platform may do well at attracting its filmmaker audience, but can’t attract or retain the broader audience needed to cross over without the cool, quality content. Additionally, the independent filmmakers to which they market their wares, on average, don’t bring any sizable or loyal audience with them either. Thus, we witness desperate strategies depending on gimmicks, convoluted pricing schemes, exclusivity windows, facebook integration, and so on, etc., to attempt to pull in viewers while generally perpetuating the sad repetitive cycle of hype, then failure, again, and again. – All while everyone, from the filmmakers to the platform creators, continue to seek the answer to the exact wrong question, “How do we get people to pay for this stuff?”

This has been the question from top to bottom for several years now, causing everyone to scramble to figure how to build and engage an audience for their work, their film, their program, their content.

Enter the dawn of the PMD.

To be fair (and in full disclosure) I’m friends with and admire the work of Jon Reiss, who coined the PMD or Producer of Marketing and Distribution terminology. I think it is a fully solid notion to have someone, from day one, working on those aspects of how you will eventually market and distribute your work. It’s overwhelmingly logical to pay attention to an overwhelmingly large part of the modern day filmmaking process, especially if you’ve spent someone else’s money and hope to sustain your own career. Ultimately, it’s a necessary evolution of the production team going forward as the congestion of the independent film marketplace continues to grow exponentially and the road to worthwhile distribution continues to fragment.

Sadly though, the currently available anecdotal evidence seems to convey a pretty across-the-board perversion of the idea in which those hanging their shingle as a PMD are doing so with the ‘platform’ mentality. They are simply a fee-for-service provider marketed direct to the filmmaker audience. In many cases, this is done without direct accessibility to a broader audience of viewers or any true experiential understanding of how to attract said audience, or practically distribute a film. Add to that, many are entering this arena with a limited industry understanding and professional reach.

For the PMD to be truly valuable, they have to be a producer first. Like all the producers who have come before they must be one of the first people on a project and one of the last out the door. Have a keen understanding of production and its management. Have taste and a true grasp of ‘what is good’. Have a personality that attracts and the relationships to demonstrate such, -and I’m not just talking about the ability to attract money. Understand that while social media is a great tool, to get things done you have to be active in the real live community of artist and business people that make up this industry. Have practical marketing experience, including the knowledge and vocabulary to effectively communicate the project to everyone that stands in between the film and its eventual audience from the person taking stills or video on set, to the designers, the publicists, the press, the critics, the bloggers and beyond. Finally, have the steel will to see things through no matter what the obstacles, as there are always obstacles, at every turn no matter the budget, the cast, or the deal.

Yes, there is now abundant opportunity to make things and freely share information. Yes, there are numerous opportunities to go it your own way and carve out your own path. Yes, we are more connected than ever, and yes we are still stuck in a rut because we can’t seem to find plausible, enduring answers to these questions: How do I get money to make this? How do I get people to pay for it when it’s done? How does one sustain over the long haul? Problem is, these are not the right questions, and their answers will never ring true across the board. The questions you should be asking yourself are, “How, with what is currently available to me, do I make the best work possible?” and then, “How, with the knowledge and relationships I possess, do I take the work out into the world in a way that makes sense?”

No matter the platform, the distribution model, the perceived promise of a fledgling PMD or those very famous film festivals… it all comes down to truly hard work. Hard work that begins with creating something that others would actually place a value on. Our innovation is stagnant because we’re continually looking for customers before we have anything to offer, asking for eyeballs before we’re cool, and forgetting that in our arena of work that story is fundamental and emotional connection is where we live or die. It’s the work, stupid.

Other than the year and some of the tools of the trade, not much has truly changed. People still watch films, just differently. People still pay for experiences, if they seem worthwhile. People still seek out the new, and love to be the first to discover. People still collect, have favorites, and invest in what they deem cool. It’s easy to lose sight of these facts with the myriad of distractions we face on a daily basis, and to grow impatient with so much technology and information now at our fingertips.

Here’s the brass tacks. This isn’t the first generation to face disruption, or these questions. Just as it’s not the first to simply grab their cameras and hit the streets, or to embrace a DIY aesthetic, or try to figure out some new way to handle their own distribution. The root of our problems come from witnessing both the lottery phase of independent film which catapulted a handful of folks from obscurity into overnight success, and the emergence of the internet. It has been drilled into the hearts and minds of filmmakers the world over that you just need that one great film and it’s all over, the work is done, you’ve crossed the finish line. With that repeated narrative, coupled with the new speed of information and the promise of instant connectivity with millions across the web, it’s no wonder that it seems like it should all just be …so …easy. The truth is, even for those who were catapulted to their generally hard won overnight success, it’s not and it likely won’t ever be easy. You can’t get something for nothing, or sustain a career without sustained effort. It may get easier with experience, as many things do, but the underlying work still requires daily attention and constant vigilance.

Ultimately, we need to cling to the fundamentals. The fundamentals of our craft, of storytelling, and to the knowledge that the road out of obscurity remains quite simple: Make cool shit, then do something about it. Repeat. 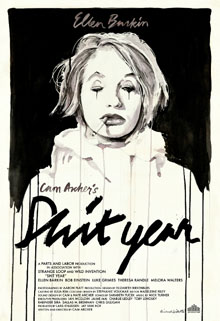 On that final note, I would like to leave you with some cool shit. One bright spot I’ve eyed in recent months is the emergence of a couple labels which have an all inclusive approach as to how they take films out, from theatrical to VOD and everything in between, but have narrowed their focus on the types of films that they work with and the amount of films they take on.

Of note is CINEMAD PRESENTS, founded by Mike Plante. Described as “a film dis­trib­u­tor for inde­pen­dent, for­eign, avant-garde, cult and under­ground films,” and “your spy for under-appreciated movies, con­nect­ing them with venues just as unique.”

When I came across Cinemad, and the time machine buidling OscilloScope, I was whisked back to the days of Island Pictures, Palm Pictures, GoodMachine and early Miramax. Those outside-the-mainstream film ‘labels’ that prepared you for the fact you were going to see something new, different, and likely very cool. Most now lost, or co-opted, in the rise and subsequent fall of the independent film industry these early film labels were something you looked for much like the early underground music labels which are now, once again, seeing a resurgence. It may not all be wonderful, but there was an aesthetic at play that you could connect to and generally trust. In our current endless sea of media it’s a bit refreshing to see some of these new labels emerging, curating and championing the next generation of cool.

To bear witness to this dawning and assist in its survival, I suggest catching filmmaker Cam Archer’s new film, SHIT YEAR, from Cinemad Presents which opens this Wednesday (9/21) at the IFC Center.