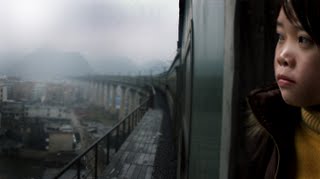 The most difficult decision I had in the making of Last Train Home is one that spans from shooting ground to editing room. It was at the painful moment when the crew and I witnessed the father become frustrated and hit his daughter right after they arrived at their village home before New Year’s Eve. To film or not to film? The ultimate question in documentary filmmaking was being put in front of me. In a filmmaking sense, this was a rarely intense moment, which revealed incredible personalities and conflicts of the protagonists. It also made an unusual twist to the story line, and potentially the climax of the entire film. But on a moral and ethical level, the filmmaker is, as always, being challenged if he should keep a documentary filmmaker’s observational objectivity or if he should be a compassionate human being. It’s a tough choice for any filmmaker.

When the father hit the daughter, I was in another room, and my cameraman and sound man were filming the outbreak of the confrontation. I heard the shouting and immediately came to the room. The daughter had already fallen on the ground. For a split moment, I had struggled to comprehend the situation and tried hard to make the “right” decision. I surely didn’t want to lose the scene, but it’s also difficult for me to see the family breakdown. We had spent so much time together, the crew and the Zhangs were like one family. I had been put on a hotspot at that moment when seconds felt like years. When again the daughter agitated the father and he tried to smash her the second time, my intuition took over mental debate, and I went into the frame to separate the two.

In the editing room, I had a very hard time and felt a serious moral challenge again over my own conscience. The Chinese culture always puts family in key positions in any interpersonal relationships. I felt I betrayed the Zhangs and myself as a human being by not stopping the camera upon the second I was in the room. Our editor, Mary Stephen, had a long conversion with me. She told me that I shot the footage so I should be responsible for it. It is beyond this controversial scene itself: it’s about how a filmmaker should keep his integrity by being truthful to the footage he shot and to his audience. Not hiding is the key. Not hiding your footage, not hiding as a person and not hiding as a filmmaker because your audience deserves your total honesty. This is a valuable lesson I learned in the making of Last Train Home. I can safely say it also had a great impact on my view toward life as well.