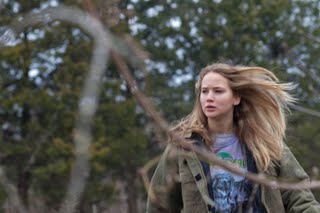 In Daniel Woodrell’s novel, the protagonist, Ree Dolly, has two younger brothers. We decided to cast these roles in Missouri and held auditions during preproduction. We were excited to find Isaiah Stone for the part of the older boy, Sonny, but we struggled to cast the younger boy.

We auditioned a lot of boys, and then paired different boys with each other. We thought we were getting close, but something was holding me back. The boys we were moving toward were not from the rural areas in which we were filming. I could sense that we were going to end up with a boy who would work hard but who would never feel like part of the scrabble that we were shooting on.

Meanwhile during rehearsals and auditions that we held on location, I would turn to the 6-year-old daughter of the family who owned the property, Ashlee, and ask her if she could show me or the boys how to do certain things. She was not shy off-camera, but she did hesitate to do things over and over. I was not sure she could sustain the arduous process of filming. But every time we reviewed the rehearsal tapes, I was drawn in by her presence with Jen Lawrence playing Ree, and the way she could be in the house and on the land with a natural ease; she was literally at home on the set.

We were down to a few days before production. The pressure to have the casting locked up was raging. So changing that role to a girl was actually an afterthought, born from desperation. Do I dare change the main character’s family composition 96 hours before we roll, after having lived with the story for three years? But I knew I was hooked on Ashlee for the role. We issued a pink draft changing “he” to “she.” That change added some interesting resonances to the story, and I feel that Ashlee turned in a strong performance that is really the heart of the film.