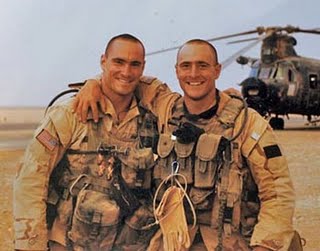 Here’s a challenge I faced making The Tillman Story: As a documentary filmmaker making a movie about Pat Tillman, I’m expected, of course, to get to bottom of who he really was and to leave no stone unturned in presenting his biography and character to my audience. Pat Tillman is synonymous with sacrifice and unflinching patriotic duty because it’s generally accepted that he was so moved by the events of 9/11 that he dropped everything, quit his football career, and enlisted in the Army Rangers. However the more I learned about Pat, the less accurate this depiction seemed. In fact, Pat Tillman never discussed his reasons for enlisting, and he specifically asked that the public and press respect his privacy in this matter.

So what do you do when the subject of your film, a dead man, has requested that your inquiries into his character and choices only go so far? Are we filmmakers private investigators, committed to unearthing every truth no matter the consequences? Or do we let other considerations inform our storytelling? As I probed deeper into Pat’s story, the two impulses found themselves in opposition: On one hand, I felt that the record needed to be corrected. On the other hand, the more I learned about Pat, the more I admired his silence. The mainstream media, I found, had initially given lip service to this same admiration, begrudgingly chalking up his refusal to give an interview to a type of Greatest Generation-style modesty, even though it meant that they wouldn’t be getting their story. But as soon as he died, it was as if we were going to turn him into a Great American War Hero whether he wanted that or not. After all, he was no longer around to object.

Pat Tillman’s tragic last words were repeatedly, “I’m Pat fucking Tillman.” He was trying to signal to his fellow soldiers, who were unloading their weapons at him for over a minute from only 40 meters away. He couldn’t have known how prescient these words were because almost immediately after his death a process began of killing him again of killing who he actually was through lies and caricature. In making this film, I often felt that these last words were a challenge to me and anyone else who might tell Pat’s story in the future, an exhortation not to participate in further mythologizing and not to force easy answers out of Pat’s life or death. As we prepare to premiere The Tillman Story at Sundance, I’m hopeful we’ve gotten the story pretty fucking right.