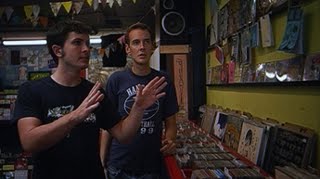 There were a couple of reshoots during production, most of which were short and painless. But after we shot a pretty complicated scene at a time-sensitive location, I watched the footage on the camera in my car while the cast and crew went and got dinner, and I knew that the scene was unusable. So I had to go meet up with everyone, who were so relieved to be done with such a tricky scene, and tell them that we had to do it all over. The problem was we shot at dusk in front of a restaurant which we couldn’t go back to. Luckily the first shoot was such a mess that the end of the scene, taking place in front of the restaurant, ended up being filmed after it got dark.

So on the last night with one of our lead actresses, after we got done shooting her final scenes at around 3 a.m., we went back to that location and reshot it. We were so groggy by then that we broke the 180-line during the first half of the scene, so I had to end up using the first version of that part anyway, and shuffle some things around to make the shift from sunset to nighttime work. So, even with the reshoot, we were just barely able to make it work in post.

A lot of other no-budget films probably would have just dealt with the footage we had from the first shoot, so I was at least happy that we had high-enough standards for our film to know that the footage didn’t meet them.