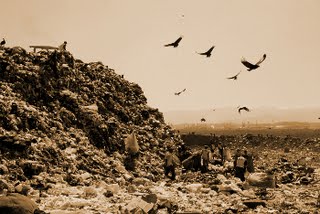 In Star Trek there’s the “prime directive,” Starfleet’s code of noninterference. What do filmmakers abide by? Should documentaries interfere with their subjects’ lives? But how could they not?

I don’t believe in objectivity. I observe the observer’s paradox every moment I’m filming. Your presence is changing everything; there’s no mistaking it. And when you’re climbing Everest with eight blind people (as I did for my last film Blindsight) there is no acceptable margin for mistakes.

So now when the artist Vik Muniz and I were conceiving Waste Land, the first decision is whether to make something happen so we can film the results — especially when that something is dangerous. I called it the Everest of art projects — making football-pitch-sized pieces out of garbage in the world’s largest landfill, then attempting to sell photographic prints back to the rich people who threw out the garbage in the first place to raise money for the poorest people in Brazil.

When I first met the catadores, or garbage pickers, they were shockingly cool. One of them finds Machiavelli’s The Prince, teaches himself to read, and ingeniously compares the politics of 16th-century Florence to today’s favela wars in Rio. They never went to school, get their books from the garbage, yet have a keener love of books than most graduates and a better grip on life than most people I know. They told me they chose to work with garbage because, unlike prostitution or drug dealing (their other career options), the only persons they are hurting are themselves. Is the same true of my work? Because once we began filming some of the catadores no longer wanted to go back to the garbage, and as the drama unfolds, is that a good thing or a bad thing, and whose responsibility is that?

Something I love about Waste Land is that the questions poke through the fabric of the movie as things get messy. As with Blindsight, when the decision to climb Everest is dramatically questioned on-camera as things head south, in Waste Land Vik and his wife start to fight on camera about whether we are hurting the people we are trying to help.
Because you always have a responsibility as a filmmaker, just as you do as a human being. The question is what that responsibility is.