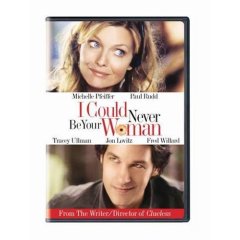 Ninety-nine percent of interviews with directors and cast members about working on a film fall into the “everyone was so wonderful, it was like a family, I had such a great time” mold. But the opposite can sometimes be a better sell, or, at least, can more effectively cut through marketplace noise. And sometimes filmmakers don’t have a choice — if they want to promote a film that seems like it’s in trouble, they’ve got to spill the beans about what went wrong.

A case in point is this article by Missy Schwartz in Entertainment Weekly about the straight-to-video release of I Could Never Be Your Woman, a comedy directed by Amy Heckerling and starring Michelle Pfeiffer and Paul Rudd. It’s a heartbreaker, a tale of how bad business deals and a neophyte new-money financier/distributor (Bauer Martinez) led to bad feelings all around.

We’re all familiar with the story of the $200 million blockbuster that weathers misfortune on its way to the multiplex. Woman, however, is something of a subcultural curio. It’s a modestly budgeted indie that, while far from perfect, never got the chance it deserved, hitting every speed bump and knocking over every traffic cone along the way. The experience has been one of the most frustrating of Heckerling’s 26-year career — and, incidentally, coincided with the illness of both her parents, whom she was nursing through heart ailments and chemotherapy. The director has yet to wrap her head around it all. ”I don’t know what to say because I don’t have all the information. I don’t know what goes on behind my back…. I always feel like, if you don’t have anything good to say, then don’t say anything.” She sighs. ”Bitterness is so ugly. I don’t want to go there.”

I haven’t seen the film — it’s on my Netflix cue — but I’m a fan of all involved and can’t believe the film doesn’t deserve better.