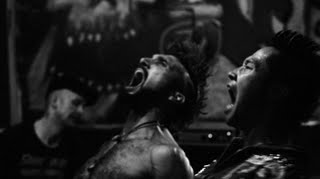 The thought of making The Taqwacores into a motion picture happened right after I finished the book. It took weeks for me to voice the thought to others, and weeks more to actually act upon it.

Was I ready to take on such a subject? Was I the right guy? Were my intentions right? Would people get the point? Would it be more misunderstood then understood?

These were the questions swirling in my head. The idea of physically making the film at such a low budget wasn’t nearly as big a worry. The bigger concern was making a film about the ideas presented in The Taqwacores. Almost everybody involved with this film had this same kind of internal discussion at some point in time.

After about a few months of thinking about it, I finally reached out and contacted The Taqwacores author Michael Muhammad Knight. Months of pondering led up to that call. After that call was made, there would be no looking back for myself.

The decision to make this film was the hardest one to make. The weight of that decision is what maintained the quality of this production from start to finish.