BLACKHOUSE FOUNDATION STRESSES STRATEGY AND COMMUNITY IN THE FESTIVAL PROCESS 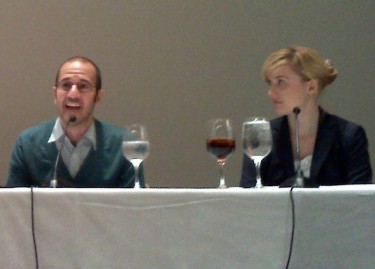 Last night at HSBC’s corporate headquarters in New York, The Blackhouse Foundation celebrated the launch of the 2012 film festival season with a networking event and panel discussion focused on festival strategy.  Now in its fifth year, Blackhouse is a non-profit organization set up to support communities of black filmmakers throughout the festival process. The Foundation has had a presence at many of the top North American festivals, including Sundance, Tribeca, Toronto, and the LA Film Festival.

Blackhouse exists to help black filmmakers at all stages in their careers, a fact made clear by the event’s attendees. The talent in the room ranged from NYU film students in production on their theses to up-and-coming documentarians like Michael Brown (whose first feature 25 to Life is currently in post production).  Also in attendance were more established filmmakers such as Gun Hill Road director Rashaad Ernesto Green and Precious producer Lisa Cortes (who also serves on Blackhouse’s board.)

A sense of community pervaded over the proceedings. And indeed, the importance of such a community was stressed during the night’s panel discussion. Blackhouse co-founder Carol Ann Shine spoke of the sheer number of filmmakers competing for shelf space in today’s film festival environment. She stressed that filmmakers should align themselves with organizations such as Blackhouse, stating that “having a community behind you, or a village so to speak, really does help.”

Meanwhile panelists Basil Tsiokos of the Sundance Film Festival, Cara Cusumano of the Tribeca Film Festival, and Amy Dotson of IFP discussed what filmmakers can do to make sure that their submissions stand out from the masses. Dotson stressed the importance of a compelling artistic statement, one that captures the passion behind the filmmaking process. “I want to know you as a person,” she explained. “That you’re not in this for a hobby.” Cusumano recommended reaching out to programmers directly, arguing that “people think the process is impenetrable. It isn’t.” She even stated that she appreciates it when filmmakers deliver their submissions to her in person, then stick around to chat with for five minutes. Tsiokos reacted to this statement with bewilderment – clearly it’s not a stance shared across the industry.

For his part, Tsiokos, who works on the documentary side of the Sundance programming team, argued that what filmmakers should focus on is making as original a film as possible. Reasoning that the best films naturally do rise to the top, he shared that when he screens a submission, he doesn’t want to see the same thing that’s been submitted a thousand times before. If a film tackles its subject matter in a unique way, or shows him something new, it will stand out. And, even if such a film doesn’t have mass appeal, Tsiokos will be more likely to recommend it.