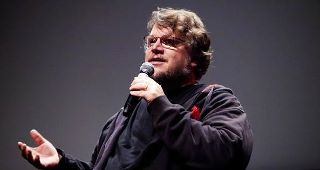 The king of Hollywood genre spent his Hallowe’en in Toronto where he held court at the TIFF Bell Lightbox to speak about his career and present five nights of some of his favourite horror films. Guillermo del Toro launched the series last Thursday when he introduced the 1996 Italian flick L’arcano incantatore (The Arcane Enchanter) and answered questions from TIFF’s Artistic Director Noah Cowan.

Despite being a bigshot Hollywood director, del Toro remains a film geek, the kind of guy who can rap about Road Warrior for hours. After showing a montage of some of his favourite movies (including Mad Max and Planet of the Apes) Del Toro started by explaining that he’s in town to shoot the alien invasion blockbuster, Pacific Rim. “What I do every morning before I go to the set — I watch about 30 minutes of a movie I love,” he said, “but it doesn’t have to do with anything with the scene we’re shooting that day.”

It’s a ritual that dates back to 1993’s Cronos, his first feature. Cronos was hell to make. Del Toro mortgaged his house and sold his comic books for food. Often, it was a pain to find locations such as a “pure” white bathroom (“all the bathrooms in  Mexico City are pretty horrendous”). Shooting days limited his actors’ availability, so shots were cheated (i.e. filming the leading man’s shoes, not his face). “People always think the director controls everything like a super genius. The reality is the director’s craft is very precarious.  You’re dealing with inconvenient, horrible things all day long. The art of directing is the art of dealing with adversity: how to make your movie better when everything went wrong.”

Cowan showed clips from del Toro’s career, starting with the 1987 short, Geometria, where a demon rips a neck vein and eyeball out of his real-life mother. “She was one of the easiest actors to work with,” jokes del Toro. He explains it was tough for audiences to accept horror films in those days, yet he has “always defended genre. Made when he was about 23, Geometria was a “very irresponsible, young gesture….”I had heard that genre was crap so I decided to make the most offensive film and kill everybody in the short in five minutes. It wasn’t very good, but it was grotesque, but I thought in genre you could find some beauty.” 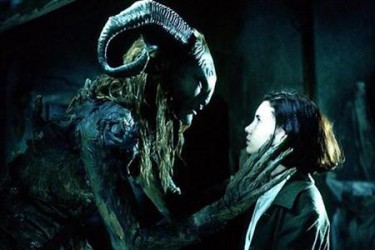 The talk climaxed with del Toro’s most celebrated film, Pan’s Labyrinth, in which a girl’s fantasy collides with the grim reality of war. Del Toro freely mixed anecdote with jokes all evening, but now spoke in a serious tone about how the  film arose from an inner pain. “The world can be a fucked-up place, but if you look at it the right way you can transform it.” He added about the heroes in all his films in general, “Our defects make us great. I want heroes that make mistakes.”