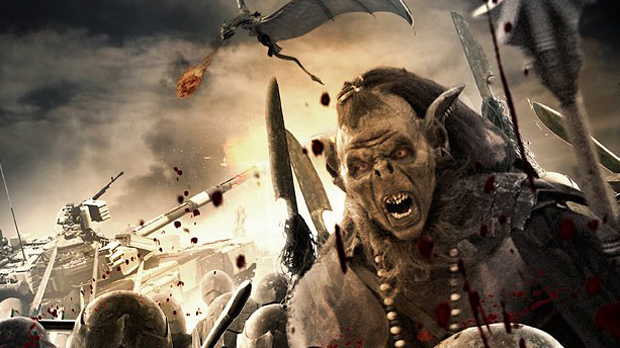 by Randy Astle
in Directors, Filmmaking, Interviews, Production
on Mar 15, 2013

Microbudget film doesn’t venture into the expensive world of science fiction too often, and certainly not the brand that features hordes of orcs and other fantasy creatures. But that’s exactly where Emmy-winning director Kohl Glass, whose short film Der Ostwind played at Sundance in 2007, wanted to go with his debut feature, Orc Wars. The film, which has wrapped and is currently gathering its finishing funds on Kickstarter, features ex-Marine John Norton (Rusty Joiner) who buys an isolated western ranch that turns out to contain a portal to another world; when orcs use it to threaten an elf princess (Masiela Lusha) and launch an invasion of John’s world, he reluctantly springs into Rambo-like action (the trailer can be seen here). Glass spoke with Filmmaker while working on the film’s edit.

Filmmaker: This is your first feature film as a director. Tell me a bit about your background and what led you to make a film about orcs of all things.

Glass: How I was led to a film about orcs is a good question with a circuitous answer. I’ll circle back to that. As for my background, I’m from Arizona, but most of my childhood was lived in very small towns in Colorado where I spent a lot of time creating and wandering in the woods. I was the kid with the “daydreams in class” box perpetually checked on all my report cards. I loved drawing, especially airplanes, so for a long time I wanted to be an aeronautical engineer . . . but then, to my utter heartbreak, I learned that math was involved. It was not long after that when I decided I needed to do something creative with my life if I was going to have any chance at happiness, and so I decided I wanted to be a comic book artist. By then I was fresh into my adult years and I quickly learned two things: 1. I was only really interested in being a comic book artist because I wanted to tell stories visually; 2. I wasn’t that great an artist. One semester, I took an Intro to Film class at Mesa Community College and that’s when filmmaking really opened up in my mind as a creative possibility. Shortly after, I transferred to Brigham Young University and got into the film program there.

And here’s where the two parts of your question merge. At BYU I became good friends with Jason Faller and Kynan Griffin (who would later be the producers of Orc Wars), working with them on various projects through the years. They started Arrowstorm Entertainment, a production company that specializes in genre films, specifically fantasy (though they have been know to delve into zombies a time or two), and they made a movie titled Orcs! which I edited. Orcs! was a comedy/horror film about two park rangers taking on a horde of orcs that emerge in their national park. Orcs! did well financially, but Jason and Kynan felt that because it was a comedy with a slow-burn horror element (seeing only the orcs’ victims and not the actual orcs for the first while of the film) it hurt their foreign sales. They wanted to revisit the concept of orcs in our world, but this time have it be a straight forward action/fantasy film. Early last year Jason called me and asked me if I’d be interested in writing and directing their new orc movie. They gave me a laundry list of things I had to include in the film (i.e. our hero interrogating an orc, a hot Elf princess, a dragon fighting a tank, etc.) and then set me loose. I had a lot of creative freedom as long as I stuck with the concept and checked off everything on their checklist. And that is how my background led me to a film about orcs.

Filmmaker: What was it like directing an army of monsters? What did you do with the actors, including the human ones, to ground them in believable given circumstances — or is that not even a huge issue with a film as fun and fantasy-based as this?

Glass: Well, our “army” only consisted of six to eight orcs at any one time. There’s a lot of replication going on in the film, some done in post, but a lot we pulled off in the shoot. We didn’t really plan it this way, but we generally had two cameras on set, so shortly after we started shooting, an ad hoc second unit was formed and they took any orc scene that didn’t have one of our principal actors in it. If there wasn’t a scene to be shot, they shot footage of orcs getting killed (we needed a lot of that). Sometimes that system worked great and sometimes, not so much. However, it became apparent very quickly that having that 2nd unit was the only way we could finish shooting a film like Orc Wars in 15 days.

As for grounding the actors in believable given circumstances . . . I want to say it wasn’t an issue, but I know it is always a necessity for any kind of acting. I just think it’s not as difficult as it would seem. Of course, I’m saying this as a director and not an actor, but I think if you can instill the character with raw universal emotion, it doesn’t matter what or who you’re playing, no matter how fantastic, it will be actable.

Filmmaker: Fantasy and science fiction are difficult in independent films because of budgetary restrictions. Since you’re not Peter Jackson, how did you approach the special effects, including the CGI, and keep the costs down?

Glass: Sometimes, in my most quiet and dark moments, I am Peter Jackson. However, I’m always asleep when that happens, and that’s a whole different discussion.

This is a tricky question, in that it’s one I think we, as independent genre filmmakers, are always trying to figure out. I would love to say the answer is planning. I wish I could say we kept the budget low by planning the VFX shots, as well as the whole movie, backwards and forwards, to the nth degree, making sure all of the money gets up on screen. And that is definitely the answer, but what I quickly found was that it is much easier said than executed. I think the next best thing is to know what you can pull off. Arrowstorm had done a number of films with dragons, so we knew we had all the elements in place to include a dragon in Orc Wars (which is easily the most difficult and expensive VFX element). Also, this isn’t Arrowstorm’s first orc-centric movie either. They already had a lot of the costumes, masks and weapons we needed to make an orc horde. We kept it less expensive by pulling together the resources that were at hand from the experience we had.

Filmmaker: You’re based in Utah, which has a rich history as a location for westerns and other studio films. But how did shooting there affect this production? I’m thinking of the state of the industry there, any tax breaks or other benefits, and of course the locations where you shot.

Glass: I’m glad you asked this question because, as anyone who has talked to me about film in the last two years knows, I love singing the praises of Utah. It is my opinion that as the film industry becomes more and more decentralized, Utah is going to emerge as one of the biggest filmmaking hot spots in the country. What we are able to do here is nothing short of amazing. With comparatively miniscule budgets we have consistently brought high production values and amazing collaborative talent to the screen. The state itself has a competitive tax incentive of 25% and, as you mentioned, it has such a diverse landscape that it can handle shooting any number of genres . . . including fantasy. One of the reasons this is all possible is because the LDS Church is based here, and they are constantly churning out a massive amount of media. Even if we in Utah are not all directly involved in this, the work the LDS Church provides is the bedrock on which a thriving and permanent film workforce survives. Whenever I talk about budgets with L.A. folk, they very often balk at the feasibility at our price point, but time and again Utah filmmakers pull it off, because of the filmmaking community and resources so readily at hand here. P.S. I do not work for the Utah Film Commission.

Filmmaker: I’m guessing this was probably a really fun shoot, but with a lot of headache that a romantic comedy wouldn’t have. Is fantasy a genre you want to stay with, or what else do you have planned for the future?

Glass: This was indeed an immensely fun project. I got to take some common fantasy and action film tropes and turn them up way loud, in both the writing and directing (did I mention the dragon/tank fight?). Plus, we had guns and swords. I actually broke our M4 replica, one day, playing around between takes while filming my love letter to (the original) Red Dawn scene where our lead pops up out of the ground and fires at the invading orcs (it’s in the trailer). After that, I wasn’t allowed to play with the props anymore. The majority of headaches for the shoot were definitely in getting all the orcs through makeup in time. There were a lot of orcs and very few makeup crew. It was kind of a nightmare in comparison to shooting a movie without actors in extensive special makeup.

As for me staying with fantasy, full disclosure: fantasy isn’t what lights the fire in this nerd’s heart. I was way into fantasy as a kid, but as an adult I’m much more of an existential person. So now my tastes lean more toward sci-fi than fantasy. That’s not to say I don’t appreciate fantasy. I definitely prefer it over, say, romantic comedies. I am nothing if not a geek. It was the unique hybrid of genres within the concept that allowed me to really get into the fantasy elements of Orc Wars. Now, I’m currently in the fundraising process for Redcoat, a military sci-fi feature set on Mars, which we are planning on shooting in southern Utah. There are two things that fuel my storytelling: 1. The exploration of the human condition through art. 2. The geek genres (i.e. sci-fi, fantasy, superheroes, power fantasies, etc.). It is my career goal to fuse the two when I can, to tell deep and moving stories with the elements of these genres. This has been done before, and doe well, but I don’t think it happens nearly often enough.

I think there is this common misconception that sci-fi/fantasy/comic books/etc. are trashy guilty pleasures, and can’t be about anything important, profound, or groundbreaking. I don’t hold with that. Now I should add that I can’t claim to have ever successfully accomplished this, but it is an ideal I try to reach for with every project. With Orc Wars, it was our main character’s post-traumatic stress disorder that brought the film into the realm of being “about something” for me. It was having a hero who was damaged by real world issues that made this story worth telling, not the massive amounts of orc mayhem (though that was nice too). Again, whether I achieved connecting such a fantastic concept to a core element of humanity is yet to be seen, but I tried, and I will always try.