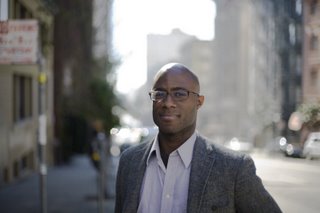 Over at his DIY Filmmaker blog, Sujewa Ekanayake posts a long interview with Barry Jenkins (pictured) about his Medicine for Melancholy, one of the real discoveries (and a film I very much liked) out of SXSW. He talks about Godard, being inspired by Claire Denis’s Vendredi Soir, and whether Medicine for Melancholy is, in Sujewa’s words, “the Barack Obama of indie films.” Here’s his response to the latter — specifically, whether or not his film can “cross over” from the typical “multi-ethnic but largely white” base of indie film to reach more diverse audiences.

“The Barack Obama of indie films.” Man, that’s some shit. But you know what, Barack’s doin’ alright for himself so I’ll take that, I’ll take that. And to go farther down the rabbit hole you’ve opened, I’ll take a page from the Obama playbook and stress that Medicine For Melancholy isn’t a race based film, nor is it an anthropological study of black hipsters. The issues of race are present because they drive the character Micah, and in so much as he’s a character we come upon in a moment of intellectual crisis, whatever notes on race that can be gleamed from the film are chaotic and shifting, not at all a thesis statement. Class politics drive the film just as much as race, but the issue of race is such a provocative subject it overwhelms all else. That’s fine. It’d be untruthful of me to say the issues of race discussed in the film aren’t important to me, but I think what comes across in the reviews —which thus far have nearly ALL been written by white reviewers — is that the film is about identity above all else, about resolving one’s perception of class and race within the rubric of a setting, the city we choose to spend our lives in (something often taken for granted when we discuss identity), in this case San Francisco, and coming to a point where you’re simply comfortable with yourself. What human being on this planet hasn’t at some point struggled to come to terms with their identity? It’s in this way that the film reaches some notion of the universal experience, and I think that’s why the people you mention, the supposed “cross-over” crowd, have responded so favorably.

And here’s the film’s trailer.