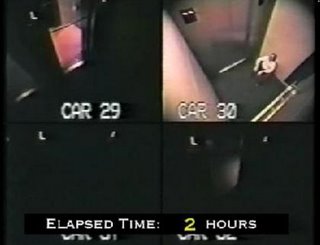 I was on two short film juries in the last two weeks. If this web video from The New Yorker had been entered in either of them, it would have been a finalist.

Via Cory Doctorow at Boing Boing:

“Up and Then Down,” Nick Paumgarten’s New Yorker feature on elevators, is centered around Nicholas White’s ordeal of being trapped in an elevator for 41 hours after he left his office at Business Week to go downstairs for a cigarette. The article is accompanied by an extraordinary time-lapse video of White in his cage, rattling back and forth like a trapped insect: