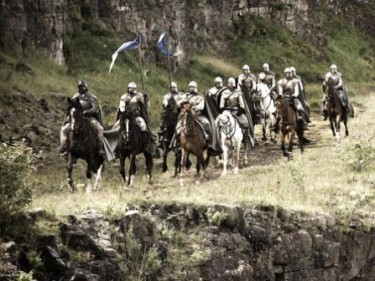 Welcome to part two in a series highlighting some of the most innovative, groundbreaking TV of 2011. This installment’s focus is HBO’s wildly ambitious and equally expensive fantasy series, Game of Thrones.

Booker Prize winning author Salmon Rushdie recently had some not so flattering words for Thrones. In a recent interview with Haaretz, he said:

“Most novels published are bad novels, most plays put on are bad plays, most movies that come out are bad movies and that is also true of TV. Nineteen times out of 20 you fall asleep. There was a series called Game of Thrones which was very popular here in the United States, a post-Tolkien kind of thing. It was garbage, yet very addictive garbage – because there’s lots of violence, all the women take their clothes off all the time, and it’s kind of fun. In the end, it’s well-produced trash.”

Watching the first season of Thrones, a show adapted from the best-selling fantasy series A Song of Fire and Ice by George R.R. Martin, I never found time to pause and consider if what I was watching was indeed, as Rushdie puts it, “trash.” The production values are too high, and the pacing is too lightening-quick to invite such initial conclusions. But on further thought, Rushdie, who is in development on a TV show of his own for Showtime, is not wrong on several of his points. Game of Thrones is highly addictive. The violence is often quite shocking, oftentimes excessively so. And the nudity does feel quite gratuitous.

But do these facts render the show meritless? To answer this, we need a better explanation of what exactly Rushdie means by “trash.” What he’s really speaking about, it seems, is in essence the difference between health food and junk food. To Rushdie, Game of Thrones is junk. It tastes great, it’s easy to swallow, but it has no enriching qualities. You’ll gorge. You’ll waste an entire weekend marathoning through the entire first season. But you’ll end up with nothing gained except a few extra pounds.

Conversely, when Rushdie speaks of “good TV” he’s speaking about something that might taste good, but more importantly, something that is good for you as well. He’s coming from a very literary perspective, deeming “good art” something that probes beyond the aesthetic, beyond the pulpy, and gets to some deeply earned thematic truths. And again, Rushdie is not wrong that Game of Thrones falls short in this category. When the show slows things down to focus solely on the thematic, it feels forced. The below scene, in which the show paused the action to let a minor character wax philosophic on the nature of a strong leader, was the low-point in an otherwise gripping season finale:

So is Rushdie correct? Is Game of Thrones trash?

Let’s explore some of the things that the show does well. It almost goes without saying, but Game of Thrones looks amazing. Easily the most expensive TV show ever produced, Thrones brings to life a world nearly as sweeping, diverse, and stunning as Peter Jackson’s Lord of the Rings. On a purely aesthetic level, Thrones is a colossal achievement for TV.

Even more important though is the fact that the show’s world is populated by engaging, intriguing characters. There are few weak links in the cast. Standouts include the traditionally noble Ned Stark (Sean Bean) and the conniving yet endearing Tyrion Lannister (Peter Dinklage, fully deserving of his recent Emmy win).  It’s a pleasure gleaning each character’s motivation, then watching everyone butt heads like cogs in a machine far greater than the sum of its parts. Indeed, Thrones’ greatest achievement might be its grand interconnectivity. The series surveys a diverse set of characters, from gluttonous kings to peasant soldiers to exiled princesses, and manages to tie them all together into one single system. This advanced world-building has only been matched in recent years by another HBO series, The Wire.

Coincidentally, The Wire is the other show that Rushdie singles out in his interview with Haaretz as being overrated, calling it “just a police series.” To refute that statement would take another thousand words, but in a sense, this quote gets to the heart of Rushdie’s argument. He seems to hold an innate contempt for genre. As if setting a story firmly in the world of the police procedural or in the world of the fantasy novel isn’t enough. That it’s the responsibility of art to venture outside itself and rise above its innate genre trappings.

But why can’t a fantasy series just be a fantasy series? Sure, Game of Thrones displays some flaws; chief among them the previously mentioned gratuitous nudity and sore-thumbiness of the more thematic moments. But Thrones is also vastly entertaining, surprisingly moving, and very radical both for TV as a medium and for the fantasy genre as a whole. (I’ll stay away from spoiler territory, but one plot twist in particular stands out as especially radical. If you’ve watched the first season or read the books, you’ll know what I’m talking about.)

And shouldn’t that be enough? Why do we have to hold all of our art to these rigid, high-minded standards? If a story is well-told, consistently engaging, and able to take us away from ourselves and immerse us fully in another world, isn’t that enough qualification to take it out of the “trash” bin?