by Scott Macaulay
in Director Interviews
on Nov 30, 2011 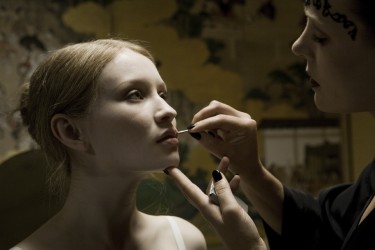 When Filmmaker chose Australian novelist Julia Leigh for our 25 New Faces list of 2008, the author of such books as The Hunter and Disquiet was teaching at Barnard while establishing herself as a screenwriter of provocative, nuanced dramas for directors like Walter Salles and production companies like Plan B. She said when I interviewed her that screenplay writing was originally a form of “diversion therapy” while working on Disquiet, but that she grew to appreciate the form. “I actually find scripts hard to read — ugly,” she said in 2008. “I got my head around the very basic conventions — by that I‘m referring to things like present tense, introducing characters in ‘All Caps,‘ minimal parentheticals… the rules of presentation. The loss of interiority — or explicitly entering into thoughts and feelings of the characters — was a challenge. I pay a lot of attention to the transitions between scenes: How will this scene ‘cut‘ against the next scene… I visualize it. So it‘s very organic: One scene leads to another. The film expands; it grows and deepens. I put myself in the shoes of the audience; [viewers] don‘t look at a film in retrospect, they don‘t anatomize overall structure. But that said, I appreciate a sense of ‘wholeness‘ in a film so that when I get to the end I realize that the ‘ending‘ was in fact there in the film all along.”

In the above quote, one can sense the director lurking beneath Leigh’s screenwriter persona. And, indeed, the original script that propelled Leigh onto our list, Sleeping Beauty, became, after a few twists and turns, her directorial debut. It’s the story of a young student who drifts into a highly specialized form of prostitution, entering each night a “sleeping chamber” and drugged somnambulance while her clients do to her what she cannot remember the next morning. (Leigh is quick to point out to me, however, that the rule of the house is “no penetration.”)

Sleeping Beauty, executive produced by Jane Campion, continued its charmed life when it became one of the rare first features to be selected for Competition at the Cannes Film Festival, where it premiered this year. Starring Emily Browning as Lucy, the prostitute, and shot in an austerely imposing style, with elegant costuming and production design, Leigh’s eerie, dispassionate drama became a controversial selection, challenging audiences and critics at the fest’s outset. “I like to get under people’s skin,” responded Leigh at her press conference, and, indeed, the film’s daring and formal control confirmed that her talents are not restricted to the printed page.

I spoke with Leigh at the Toronto Film Festival, where her film had its North American premiere. It opens this Friday via Sundance Selects. 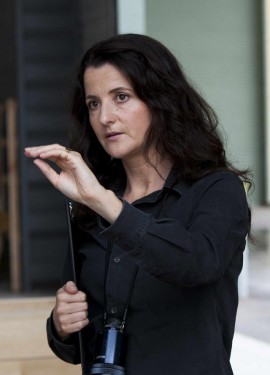 Filmmaker: So, tell me about the transition from novelist to director. Was it a big change for you?

Leigh: I think they both come from the same place, the novels and the films. The novelist and the filmmaker are both working with the flow of time, long narratives, building complex worlds, detailed characters, and both hopefully they both have something to say.

Filmmaker: But there are differences in how you work as an artist.

Leigh: Yes, even though the foundations are very similar, the process is quite different. But I do think that the perceived loneliness of the writer is still there in the [work of the] director in that I was probably the only one who held the whole film in my head at any one time. But yeah, I really enjoyed the process of making the film.

Filmmaker: I can understand how the loneliness of being a writer remains when it comes to the mental aspect of filmmaking, but what about the solitary aspect of writing versus the communal aspect of making a film? One you do alone; the other you do surrounded by many people.

Leigh: Yeah. That’s true. You do work with a lot of people, but strangely your relationships still tend to be one-on-one. I’m talking to my heads of department; I’m not always addressing a whole group of people at any one time. On set, I guess you are surrounded by people, but I found it perfectly okay. Maybe there’s a misperception that all writers are solitary, you know?

Filmmaker: In terms of evolving a visual style, the film has a formal quality to it. Did your prose style influence your visual style?

Leigh: Something that I’m quite proud of is that the film is completely cinematic. In other words, this project would never have worked as a book. There was never a point in time when I had an idea, and I thought, “Should it be a book or a film?” It never occurred to me as being prose at all. But, also, I think it’s a bit dangerous for me to try to link threads between all my works looking back.

Filmmaker: What extent did you employ or not employ a kind of realism in the film?

Leigh: I was not aiming for a strictly naturalistic film. Instead, I was looking for, I guess, a heightened realism. With both prose and this film, I want to establish, let’s say, tonal atmosphere, and that’s such an ephemeral thing. I guess that’s something that I was aware of bringing over from writing novels — the importance of tonal atmosphere. But when I wrote the script, I envisaged the film that you see. Even at the first draft, I had in the script this idea of the point of view of the camera on the fourth wall of the sleeping beauty chamber — the idea of the camera as a tender, steady witness. So that visual style was put into the script from the first moment.

Filmmaker: But originally you weren’t the director of the film — is that right?

Leigh: When I was writing the script, I wasn’t necessarily planning on directing it, but I also didn’t write it for anybody else. I wrote it without any intention of directing; I guess, in a way, the script was a stepping-stone. I didn’t wake up one morning and say, “You know, I think I’ll make a feature film.” It was a step-by-step process.

Filmmaker: What about the psychology or non-psychology of the characters? It’s sort of a fairy-tale. There’s almost a metaphorical quality to it. In directing Emily Browning, what sort of things did you think about in terms of the psychology of someone who may be in that position? Were you giving her conventional motivation, or was it more about being a character in a fairy tale?

Leigh: Well, the world is a very strange place (laughs). With Emily, first of all, I think Emily did a great performance. The role was a demanding role. I mean, it separated out the actors. Some didn’t want to do it, some did want to do it but their management did not want them to do it. And others like Emily really wanted to do it. She completely understood the script from the beginning, and she knew that everything she had to do was in keeping with the script. So, it was pretty straightforward, actually. I feel that the quality that she brought to this role was a sense of a quiet, willful, recklessness. I don’t see her as simply passive. I see her as having a more radical personality — perhaps her perverse provocation to the world is, “My cheek is turned, try me.”

Filmmaker: Do you see that as an empowering quality or a debilitating one?

Leigh: Well, I remember what it was like being in my early twenties. I don’t think it’s a very easy time of life. I think that the travails of that passage of life are often [underestimated]. Sometimes I think it’s possible to knowingly act in ways that are not in your own best interests, even going so far as to have an ambiguous commitment to staying alive. Staying alive, it’s not something to take for granted.

Filmmaker: The film had a controversial reaction at its premiere. What surprised you about that first screening in Cannes?

Leigh: I’m really happy with how the film has been received. We were in the main Competition at Cannes. That was great. And we sold the film widely so that’s also great. And the film seems to have divided audiences. (Laughs)

Filmmaker: What does that Competition pressure feel like? It’s very different than if you’ve been in Directors Fortnight or Un Certain Regard.

Leigh: Well, I didn’t really know any better (laughs). I guess, the challenge was to try to really be present and not to disassociate — to sort of just really be there. I was well aware that in two weeks time, I would be back in Sidney and it would all be over (laughs). So I tried to enjoy it. I mean, I’m a writer, I’m very observant so I was almost playing the role of an anthropologist at Cannes (laughs).

Filmmaker: What was the spark of this basic idea? I know there’s a Kawabata tale with a similar scenario.

Leigh: I had read and loved two very well known novellas: one by Yasunari Kawabata (The House of the Sleeping Beauties), and one by Gabriel Garcia Marquez (Sleeping Beauty and the Airplane). They both told the story from the point of view of an older man who pays to spend the night alongside a drugged young girl. But this kind of story has long antecedents. I mean, in the Bible, King David sets out to spend the night alongside sleeping virgins. And of course, you have the fairytale, Sleeping Beauty, that all girls are told at a tender age. And you have the phenomenon of sleeping girls on the Internet.

Leigh: Oh, well you have to look into it (laughs).

Filmmaker: Tell me a little bit about it.

Leigh: Well, one of the nooks and crannies of the porn world is images of sleeping girls. So this kind of thing exists. It’s out there. It’s something that I responded to and am transforming. I would probably say that this film leans more toward the death side of the poles of sex and death, if you know what I mean. And I think it’s worth mentioning that it’s the portraits of the older men you see when Lucy is sleeping that make the film work. They make it work as a whole, as a totality, because we have a portrait of Lucy in her youth and then we have these older men whose experiences are in relief to youth. For me, that makes the story richer than just a simple portrait of youth all the way through. Also narratively, it’s interesting that you’re with Lucy and that you know more than she knows. The audience sees what happens in the chamber but Lucy doesn’t know, and I think that that knowledge of the audience increases their inner tension.

Filmmaker: What is next for you as a filmmaker and also as a writer?

Leigh: I’d love to continue doing both: writing novels, directing films — my own scripts, probably, as a director, and I will continue to write perhaps screenplays that other people might direct. I’m trying to resist being streamlined into any one identity. I think we’re all incredibly adaptable and so maybe we should all take off our hats and put them in the ring and pull out another one (laughs).