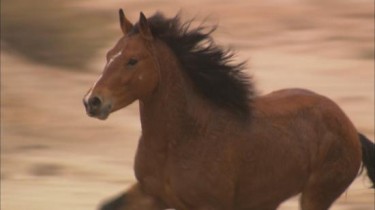 When my husband and co-director, Greg, and I were first alerted that our film was one of 29 eligible for the Gotham Audience Award, we were intrigued, but realistic. We knew the chances that our documentary, Wild Horse, Wild Ride, would make the top FIVE were slim. After all, we were up against many wonderful and worthy films and while Wild Horse has earned numerous audience awards at festivals, it has yet to be nationally released. Still, we thought it was a tremendous opportunity, a kick-in-the pants so to speak, that would motivate us to reconnect with our audiences, do more outreach and social media, and spread the word about our story. Only good things could come of that. But we never let ourselves hope that we’d be named an official Gotham Award Nominee.

We had little time for such fantasies anyway. In addition to nurturing our first feature film, we’re raising a 3-year-old and a five-month-old. In fact, I was getting our little one up from a nap at our Wyoming home when the phone rang the morning of November 4th. Seeing the 212 number on my missed call log, it never occurred to me that it could be the Gothams calling. When I checked the message and heard, “this is Agnes Hahn from IFP. We’ve tabulated the votes and I have some good news….” I nearly dropped the baby in shock.

For our movie to be honored alongside some of the most important and talked-about films of the year is a climax to a journey that began over three years ago when we first read a blurb in our local paper about a program that challenged people to tame wild mustangs in order to prepare them for adoption. When we premiered the film at the Palm Springs International Film Festival last January, only a handful of people had seen it. We sat, sweaty-palmed, for the entire first screening. When the movie received a standing ovation at the end, we thought that would be the highlight of its festival run. We could have never imagined that less than a year later, we’d be at Cipriani Wall Street watching a clip of our film play in a room packed with the most talented and influential individuals in the world of independent cinema.

We are so humbled and honored to be included in a group containing such incredible films as Being Elmo, Buck, Girlfriend and The First Grader. We cannot extend our gratitude enough to each person who took a moment to cast a vote and put us there. Now let’s just hope the babysitter shows up at our hotel on November 28th!