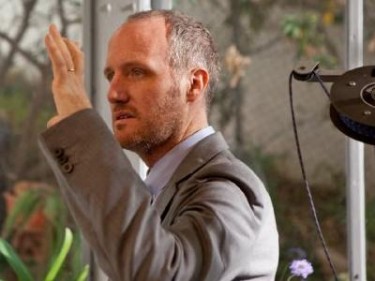 I was very very lucky. First, because I was blissfully unaware that the Gothams would announce the nominations on that day. In fact I was trying to get used to the idea my film — Beginners— had run its course and now it was time to put it to bed, move on, stop worrying about that project. Which isn’t easy. I started this in 2005, I’m used to putting everything I have into it, and the film contains so many people and places and things I truly love (both the real people who inspired the story and the filmmaking family that made it come to life) so it’s bittersweet to say goodbye. I didn’t tell any of my friends or even my wife of the nominations for a few days. I’m the kind of squirrel that hides away any acorns he may get, stuffing them quietly into a tree, so no one can take them away. I was also very very lucky because my film came out in June and is, let’s be honest, still pretty “small,” and let’s be even more honest, if we didn’t get nominated with these other great films, this would have perhaps really been the end of the road! And then, the real lucky part is harder to describe; I think a big reason I make films is to be “with” all the films and filmmakers I love: (Istvan Szasbo, Agnes Varda, Woody Allen, Milos Foreman, Frederico Fellini) — it’s like having comrades (even if they’re dead, or I never met them, or they would never give me the time of day if I did meet them, or they’re just so much better than me!) despite all that when I make films I feel I’m with them, alongside them, or at least I have the same job! Being nominated here is that same feeling of being “with”, being in the group.

It’s crazy we’re nominated alongside the guy who made Days Of Heaven which I’ve been swimming in for years, and the guy who made Election which taught me so much about freedom, and the woman who made Old Joy and Wendy and Lucy, which I think about all the time; they’re so deeply/expandingly simple when I can’t help being so complicated. I remember that the day I found out I did write Ewan and then I think Melanie, I would’ve written Christopher but he doesn’t have e-mail! They’re the bodies and souls that brought it to life: Sadly Mel is promoting her first film in France and Ewan is doing something for UNICEF in India so they won’t be there. Ewan has been my great friend through all this, he always makes me laugh and he’s very comforting when I’m nervous and uncomfortable, which I’m sure on some level I will be! Luckily Christopher will be there (ever the funny rascal) and Mary Page Keller who played the mom, and Kai Lennox who played Ewan’s friend – and that will be a great treat no matter what happens. As a formerly painfully self-conscious person I utterly adore actors, they’re so juicy and free and emotional. Especially this group, once we finally got through the endless struggle to get financed, the shoot-time was really blessed, something that comes rarely in your film life. So I’ll be with some dear friends. I kinda wish all you had to do is get nominated and that was it — competition and “winning” are always such tricky things, no? I think that’s my how-to-stay-sane plan, It’s great and lucky and really rewarding to be nominated, to be “with” all these great filmmakers, sounds corny, but that’s enough.