by Nicholas Rombes
in Columns, Filmmaking
on Nov 28, 2011

The seconds tick down. Dorothy crawls, in anguish across the floor, coming dangerously close to the closet that hides Jeffrey. She is abject, and also strangely free, the sort of freedom that comes from knowing that the worst is yet to happen, yet again. The sharp expectation of pain that gives life meaning, but that can also carve out what was best in you and wound and warp it forever. It is like a scene from a silent movie, as Dorothy’s body conveys a meaning beyond words. Isabella Rossellini is the star of a hidden drama within the drama that is Blue Velvet, which is to say that she is doing things that her mother, Ingrid Bergman, could never have done on the screen, even had she wanted to. In fact, Bergman also had played a woman tormented in Europa ’51, 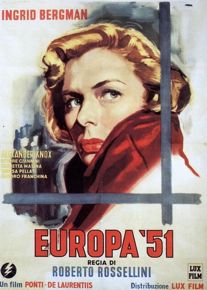 which was released just a few months after Isabella’s birth. (Dino De Laurentiis was a producer for both Europa ’51 and Blue Velvet.)

Dorothy crawls, childlike, abject. She is soon to have a terrible violence visited upon her, and since she will be unable to fight back, the movie itself must. In her remarkable forthcoming book The Severed Head: Capital Visions, Julia Kristeva writes:

Death defeats me, nullifies me. But violence possesses me: the hold of an active pleasure over a victim object, it wagers on my passive pleasure. If I refuse to be victim, I begin by exposing the violence directed at me and I take the liberty of saying so. You made the choice to be a minimalist, to say as little as possible about it? You will inevitably come to maximum grief one day. You will choose paroxysms, you will select images of slit throats that preceded yours, you will figure forth victims that you have sensed.

Tormented by violence, Dorothy chooses to possess it, and then so does Jeffrey, and then so, ultimately, does Blue Velvet itself. And Dorothy’s actions, in this second, are inscrutable, half-dark, ritualistic, and are based on codes that remain, mercifully, secret.