In early 2009 I took my childhood friend Evan Sneider, a 31 year-old with Down Syndrome, out to lunch to see whether he’d be interested in letting me write a feature length film for him to star in, Girlfriend.

“That’s fine with me,” Evan said with a smile while finishing a steak and cheese pizza. “Sounds like fun.”

Five months after that lunch we were casting the other roles and had found three willing actors – Shannon Woodward, Amanda Plummer, and Jackson Rathbone – to act alongside Evan and a group of non-professionals I hand-picked from our hometown of Wayland, Massachusetts.

And then, another year and some film festivals later, we were walking down the red carpet at the 2011 Gotham Independent Film Awards as a nominee. With Evan by my side, along with my producers Shaun O’Banion and Kristina Lauren Anderson, we walked through the press line behind Evan Glodell, director of Bellflower and Matthew Lillard from The Descendants.

Back in 2009 I was skeptical about even being able to find the money to shoot (my producers eventually rounded up the $200,000 or so that we needed), and enough shooting days to do it right (we shot the film in exactly 19 days). After the shoot, it was at times frustrating, sometimes lonely – the entire experience put me through a series of psychological and emotional tests.  Whether in the editing room, trying to raise the rest of the money to finish it, clear music rights, and pay publicists for our Toronto premiere — the furthest thing from my mind was that our journey would end on a stage in Manhattan, in suits, holding a trophy in front of actors and filmmakers whose I work I grew up watching.

We all went into the evening of the awards just trying to appreciate how privileged we were just to be there. We sat at a table next to the team from Being Elmo and The First Grader, who were both nominated against us in our category – both groups were funny, friendly, and when we won, really supportive and happy for us.

Our award was the first one presented, which kind of took us by surprise. We hadn’t even started eating before Zachary Quinto and Sarah Paulson were up on stage reading the nominees for our category. When they read our names as the winners…I’m not sure really what happened after that. No matter how much you prepare words in anticipation of having to say something if you win, nothing in the world can prepare you for standing at a microphone and the only thing in your direct line of vision is Charlize Theron. 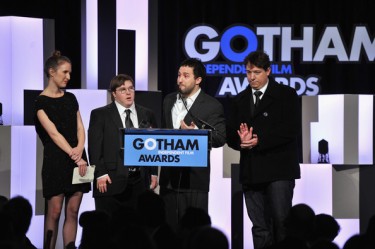 We went backstage to the press room for a few interviews and we were able to meet Christopher Plummer, who had just won along with the entire cast of Beginners for Best Ensemble.  Meeting Mr. Plummer was a dream come true, particularly for Evan, who has followed his career all the way back since The Sound of Music and who became quite close with Amanda Plummer during the shooting of Girlfriend (she plays Evan’s mother). 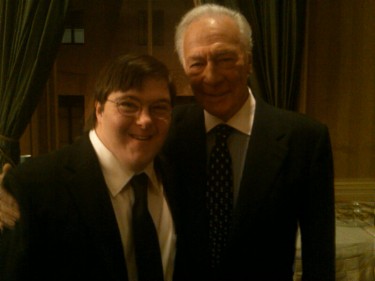 Beginnerswas a beautiful film, well deserving of the awards it won, which I got to see for the first time in Ireland at the Galway Film Fleadh.  After the ceremony had ended I noticed that Evan had tracked down Stanley Tucci (another one of Evan’s idols) and had him in an involved conversation, so I wandered to the other side of the room, where I was able to say hello to Mike Mills to congratulate him on his two wins of the night. Mike is one of the most gracious, humble directors I’ve met. This was the second time I’d seen Mike — the first was a year previously when we were seated at random next to each other at a filmmaker brunch at the 2010 Toronto Int’l Film Festival, where both of our films premiered.

After the ceremony ended, my producers, Evan and I went to the after party to celebrate with some of the people we’d met that night and we had a wonderful time. My entire team feels so fortunate to have had the chance to be a part of the Gotham Awards and we all feel indebted to them for creating such a cool award that highlights a group of films that otherwise may not have had this sort of exposure.

It was a fun night, and now thanks to the nomination and win, maybe a new group of people will be able to discover our film.

GIRLFRIEND will be available August 2012 for purchase on DVD and VOD via Strand Releasing. For more info, go HERE