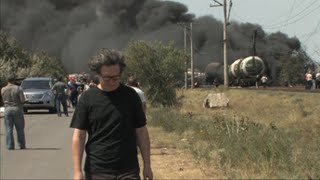 The most difficult decision was the one to expose the mistakes of fellow film and TV program makers. The related question is why I decided to do it. There were two reasons for that. Firstly those mistakes were instrumental to the justification of an unjust war; secondly in many instances there were grounds to doubt that those mistakes were innocent. In other words, those mistakes were probably lies. To me personally they were shocking because I’d seen with my own eyes what havoc Russian bombs wrecked in the Georgian city of Gori, while my colleagues passed those images of destruction, of dead and wounded Georgians for the Ossetian victims of the Georgian bombardment of Tskhinvali, South Ossetia. I happen to know the cameramen who shot the footage. It is almost impossible to believe that those mistakes were innocent as that footage was simply lifted from Georgian TV. But perhaps the most shocking thing of all was that the Western media, some of the most respectable TV networks in the world, followed the Russians down the same route. In my film I demonstrate the inaccuracies in the representation of the war in Georgia in the programs of the BBC and the German ZDF. I made three films for the BBC. I cooperated with the ZDF and appeared in its programs. I have friends who work in and for both organizations. So was the decision we are talking about difficult? You bet it was. But I don’t regret it. Because I want Russia to become democratic and the West to stay democratic.