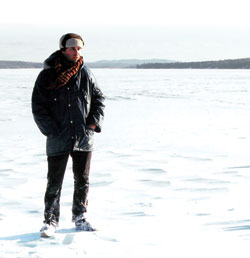 Alex Karpovsky, writer/director, 2006: Since being included in the list back in 2006, I teamed up with Indiepix to release my first feature, The Hole Story, on DVD. The film is now available at retail stores across the country, Netflix, and other outlets. I have also completed another feature, Woodpecker, which premiered at SXSW last March and is now bouncing along on the festival circuit. Currently, I am in post-production on my first feature-length documentary TJ and Dave, which focuses on America’s most revered long-form comedy improvisers, Tj Jagadowski and Dave Pasquesi. I’ve also done a bit of acting recently, playing the male lead in Andrew Bujalski’s new film along with the voices of several Russian gangsters in the newly released Grand Theft Auto IV. This winter I hope to shoot my next feature film. More personally, I am still prone to melancholy, take longer walks, eat less red meat, and have made significant enhancements to my morning positive visualization exercises. Though no overarching existential paradigm shift has take place in the last two years, the codification of numerous points of growth has Iead to a shinier, happier, more productive, more better me.

David Munro, writer/director, 1998: I wrote a first draft of what became my first feature, Full Grown Men, in 1998 the year I made the list and it took me until this year to get it made and in theaters. Not all of that time was devoted to FGM – I wrote other scripts on assignment and started directing commercials for a company called Kontent Films in San Francisco. I also shot a short film called Compulsory Breathing that played on PBS’s Independent Lens in 2002.

But for the most part making the first feature was the story.

My creative partner (and wife) Xandra Castleton and I began raising money for FGM in 2003, shot the film in Florida in Summer 2005, premiered at Tribeca in 2006, played the fest circuit that year (AFI, Cinevegas) and won the indieWIRE: Undiscovered Gems Sundance Channel Audience Award in 2007 — which got us a $50k P&A fund to release theatrically through Emerging Pictures and a $50k broadcast deal with the Sundance Channel. We recently opened at Cinema Village in NY and will play in a dozen or so theaters nationwide this Summer (hopefully more when it’s all said and done). The film stars Matt McGrath, Judah Friedlander, Alan Cumming, Amy Sedaris, and Deborah Harry, and tells the tale of a pathologically nostalgic man who tracks down his former best friend in an attempt to relive his childhood.

I remember Holly Willis saying something about my ability to create unreal alternate worlds for my stories — some of the reviews for FGM speak to this (our website has links to reviews and other info: www.fullgrownmenthemovie.com). We shot with Frank Demarco (Hedwig) and production designer Susan Block (Welcome To The Dollhouse) and worked hard to create a timeless Florida “snowglobe” world that our main character is trapped inside. I don’t know if Holly has seen the film yet but would hope it affirms her appreciation of my shorts Bullethead and First Love Second Planet.

At the moment I’m writing a graphic novel (that I hope to adapt into a film) with NY illustrator Josh Cochran called The Inferiors. It’s a dark satire about a fascist high school trying to eliminate the misfits and outcasts in order to win an excellence grant. It’s very much about status and the quest for it creating monsters.

The years that 25 Faces has spanned have certainly marked a time of transition (hopefully not a post-script) in indie filmmaking, as you’re well aware. It’s never been easy to do what we do but I’d venture to say it has never been more challenging than now. (Though I guess in some ways, with advances in digital filmmaking technology it has never been easier to actually MAKE a movie.) No one knows where it’s headed but I know film artists will keep running through walls to do what they do. 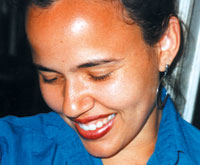 Josslyn Luckett, writer/director, 2002: It was such a thrill to be included all those moons back… me and Hollywood kind of dried up… oh well… but I’m doing cool theater. Just finished a nine month workshop at the Center Theatre Group/Mark Taper here in Los Angeles…working on a solo performance piece about a woman obsessed with the Imitation of Life films…it’s called Loving/Imitation. I’m also writing about jazz — see my blog: Come Sunday: Jazz, Trouble, Hallelujah — and curating a series of interfaith sacred jazz concerts, inspired by Duke Ellington’s sacred music at a place in Culver City called “The Jazz Bakery.”

David Birdsell, writer/director, 1998: I was on the “25 New Faces” list from 1998. Since that time I’ve been in a mysterious coma from which I just recently awoke.

No, not really. Actually I’ve mostly been working as an editor, including on Martin Hynes’s feature The Go-Getter which had a limited release this summer. I’ve also directed some commercials and made a couple of short films that can be seen at David Birdsell.net. The most recent short I made was called Hairlady and it’s somewhat more experimental than my other stuff. All the while I’ve been contemplating making a feature which has slowly been taking shape inside my head and will someday soon make it’s way out.