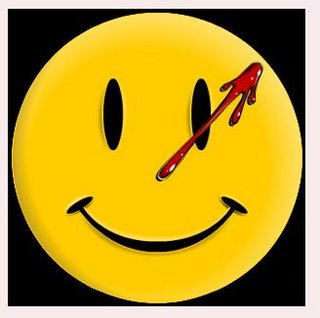 Far away from the world of indie film one of the most dramatic show business stories is unfolding. As Nikki Finke and Variety are both reporting, a high-stakes showdown is occurring in court as Fox is suing Warner Brothers over the release of 300 director Zach Snyder’s upcoming The Watchmen.

A judge has denied a Warner Bros. motion to dismiss 20th Century Fox’s lawsuit over Warners’ right to make a film based on the graphic novel Watchmen.

Ruling is potentially a huge victory for Fox, which could wind up as a profit participant in the film, and could cost Warners millions considering the film’s box office prospects. However, Fox’s legal team says it isn’t looking for monetary compensation and instead wants to prevent the big-budget film from being released altogether.

Ironically, directly adjacent to Variety’s story is this blurb promo’ing the Watchmen discussion on the Variety discussion boards:

Watchmen doesn’t come out until March, but interest in this comic adaptation is already showing signs of being the kind of crossover phenomenon that hasn’t been seen in a comics property in a long time.

For those who want to dive into the nitty gritty of this case, Nikki Finke has posted a link to a PDF download. For those who want a quick summary, I recommend reading the first of her posts linked here, which includes a detailed timeline, and then a long comment in her discussion section by a poster going by the name of “Clearing Some Stuff Up.” His post is both a great primer on how optioned material passes hands in Hollywood as well as a reasonable analysis of what’s going on in this specific case. He concludes with these thoughts:

I do find it odd, though, when studios go full speed at each other. Although they are competitors, there is a need to play nice if you want others to play nice with you. Each studio will need to confirm quotes from the others; they will need to protect and release titles; and they all do business with each other on co-productions to spread risks. An aggressive position such as this is fairly odd.

And here’s David Poland’s take on the situation over at The Hot Blog. His piece draws on research he did for an old, unpublished piece on something similar that went down with the production of The Flintstones. Poland concludes by saying that this story won’t be around for long, predicting that a Cheney-like solution will be found quickly:

The very least that Fox can expect to get out of this is their development costs, probably doubled and interest added. But Fox is playing for keeps. They will not bury a $300 million investment by a fellow studio. The blood spilt would be too red and slippery. But don’t expect them to go away for anything less than $25 million. And they will take an amount like that now… because they don’t want to gamble either. 100% of WB’s profit could be $0.

And when it comes to alternative remedies, gross points make more sense than anything else. It would be too harsh a remedy to force Paramount out and to give Fox, say, international distribution. To eat a larger percentage of the gross would be to really encroach on the investment well before any chance of recouping.

It will be interesting. And my guess? Completely silent when it happens. Sealed by agreement, settled out of court. Rumored. Lied about. And done. Soon.