GETTING INTO THE SWING OF TORONTO 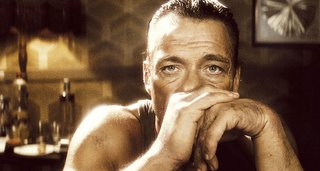 What’s with the media and indie film these days? I attend my first party in Toronto, eager to catch up with old film friends and see some new movies, but the toxic murk of today’s business environment keeps seeping in. I got a ride in from the airport with a sales agent friend who, while bemoaning the difficult market for auteur films worldwide, said to me, “You have it worse in America. It’s not that the films do any poorer there, but there’s so much focus internationally on the American release that when they do fail everybody around the world notices.” Then I went to the Peace Arch party for Mabrouk El Mechri’s very smart and entertaining genre-buster JCVD (pictured above), which features the absolute best film monologue I’ve seen in years… delivered by Jean Claude Van Damme. The party functioned also as a kick-off for the Midnight Madness section of the festival, programmed by the very energetic Colin Geddes. (A little tired from my early flight, I was amazed by the enthusiasm with which Geddes handled the 2:00 AM post-film Q&A later that night.) At the party, I ran into another sales agent who asked, “Have you seen the Wall Street Journal article? It’s another ‘sky is falling’ piece.” I hadn’t, so he forwarded it to me on the spot, and I’m linking to it here. Written by Lauren A.E. Schuker and Peter Sanders, it’s titled, “Glut of Films Hit Hollywood,” and it talks about a number of films that have failed in the marketplace due to what various industry observers say has been a surplus of production caused by easy money from hedge funds and other sources. Here are three key graphs:

Today, the credit crunch is putting the brakes on outside film financing. But Hollywood executives fear the glut created by the recent spate of overproduction is going to be felt for at least a couple more years. Some people say the worst of the oversupply problem is still about a year away.

“We’re at the top of the curve heading down,” says Hal Sadoff, head of international and independent film at ICM, one of the major talent agencies in Hollywood. “We’ve seen many of these financial institutions, private-equity firms and hedge funds pull away from the industry. But the films that they have advanced are still in production, and it will take another six to 12 months for the market to regularize again.”

Amir Malin, who acquired, marketed and distributed the hit indie film The Blair Witch Project and now runs media-investment firm Qualia Capital, says that the market for such films will get tougher before it gets easier. “The worst is yet to come,” he says.

This analysis is nothing new — and I think, as presented here, that some of it is wrong. (Before The Devil Knows You’re Dead cost $18 million?!?) But due to the mainstream media’s constant repeating of this story, I can’t imagine any new private equity investor not thinking two or three or four times about the wisdom of investing in this sector at this time.

On another note, Scott Kirsner has posted on his blog a piece linking to the Wall Street Journal article in which he asks, “Is There a Future for Indie Film? Filmmakers and Festivals Will Decide.” Like Christian Gaines who recently wrote in Variety about a new role for festivals in the distribution scheme, Kirsner says that filmmakers should consider festivals to be their primary form of theatrical release.

But I think smart filmmakers ought to consider using the highest-profile festival they can get into as the platform for launching their movie. During the festival, or on the day it ends, they should make their movie available through their own Web site, perhaps using DVD-on-demand services like NeoFlix, Film Baby, or CreateSpace/Amazon. Same thing for making downloads available: get that movie onto Amazon Unbox, B-Side, or iArthouse.

And I think festivals ought to do more to create opportunities for their filmmakers: a deal with iTunes, for instance, which puts movies into that popular marketplace (iTunes is notoriously difficult for individual filmmakers to work with), or a broadcast deal with a cable channel or pay-per-view service to put the movies on TV, plastered with festival branding, which would serve as a “Good Housekeeping Seal of Approval” for movies that might not have stars or high production values.

From a filmmaker’s perspective, it’d be good to have a movie available during the festival. If I read a glowing review of something playing at Toronto this weekend, I’m going to want to download it or buy the DVD right then –- and I may not feel the same way a week later, after the festival ends (I may not remember the movie at all by that point.)

Anyway, this is all food for thought as the festival kicks into gear. I’m off to see a few movies. Check back on the blog for my reports from this year’s Toronto International Film Festival as well as pieces by Howard Feinstein, Jason Sanders and, later, original video content from a new partnership.