Paul Krik, writer/director of Able Danger, opens his independent conspiracy thriller in four cities on September 11. (In New York, you can see the film at the Pioneer Theater.) Krik was kind enough to give Filmmaker two lists of his favorite films. In this first part, he lists his favorite conspiracy movies. In the second, he’ll list his favorite films about 9/11.

In general a conspiracy movie for me has to do with exposing. 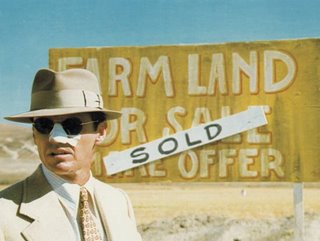 Chinatown – Greatest movie ever. Goebbel says, “If you tell a lie big enough and keep repeating it, people will eventually come to believe it. The lie can be maintained only for such time as the State can shield the people from the political, economic and/or military consequences of the lie. It thus becomes vitally important for the State to use all of its powers to repress dissent, for the truth is the mortal enemy of the lie, and thus by extension, the truth is the greatest enemy of the State.”

The Parallax View – Wow, for tone. That’s how I felt at times making this movie; All alone – a triumph of existential angst. The company video “montage” was very unsettling as a child. It will always be burned in my memory.

JFK – For the Zapruder video slomo and the massive tribute to a true American hero, Jim Garrison, who is so far the only one to hold a trial in relation to the murder of U.S. President John F. Kennedy in 1963. I met Garrison in New Orleans before he died and before the movie came out at a book signing. No one has done this for 9/11. Sander Hicks for example is still actively pursuing a DA from a relevant district in NY to take up the case.

Wag the Dog – Brilliant insight into media control is a must see.

Syriana – Glimpse into how Mid-East politics actually works. Clooney’s work is invaluable. Also Good Night, and Good Luck. Deeply profound commentary on the end of free press and the takeover of the media oligarchy. Clooney is one of the few who makes great movies that we can actually learn from.

Who Framed Roger Rabbit? – It’s so hard to take on big oil that you have to do it through a silly cartoon movie. But the message got out there. OK movie, great message you can bring your kids to. And it’s hard to look your kids in the eye when they ask “Why is it like that daddy?”

The Good Shepherd – Skull and bones probably really does rule the word. At least according to Antony C. Sutton’s who wrote one of the best conspiracy books ever, America’s Secret Establishment: An Introduction to the Order of Skull & Bones.

The Manchurian Candidate – So over the top and wonderful and yet it still got me. I was right there, believing everything while watching. Anything is possible. Sinatra is awesome.