TORONTO: NOTHING BUT THE TRUTH 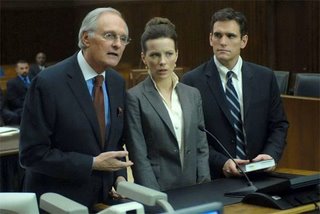 In the opening moments of Rod Lurie’s drama Nothing But the Truth, there’s an assassination attempt on the U.S. president and the government retaliates by bombing Caracas. In its final moments, the journalist who reported that the government knowingly went to war with the South American country on faulty intelligence meets her confidential source and.… Okay, I won’t spoil the ending, but let’s suffice to say that by the time we’ve reached the denouement of Lurie’s film this story of criminal foreign policy has shrunken to a depressingly conventional Hollywood tale of a mother’s idealism and sacrifice.

Kate Beckinsale plays Washington Sun Times reporter Rachel Armstrong who, through a confidential source, learns of the administration’s malfeasance and then watches as her paper fast tracks the story. Her article reveals the identity of a CIA agent, portrayed here by Vera Farmiga as a glamorous, tough-talking soccer mom. Soon Rachel is jailed by a Patrick Fitzgerald-like prosecutor (Matt Dillon) for refusing to divulge her primary source. As the months go by and she’s holed in a prison lock-up full of female cons straight out of Caged Heat, her marriage begins to crumble, her story fades from the media, and even the powerful attorney who has aced similar cases in the past (Alan Alda) can’t negotiate her release.

And what about all the dead people in Venezuela? The film doesn’t really care about real world issues because its story, pointedly “inspired by but not based on” the Valerie Plame case, strips away all the resonant messiness of that true tale involving uranium processing tubes in Nigeria, an administration out to malign its critics, and a New York Times reporter, Judy Miller, whose own pre-Iraq War reporting uncritically embraced Bush administration talking points. Rather than explore the complicated and ethically challenged relationship between Washington journalists and policy-makers, Lurie presents us with a simple, by-the-numbers defense of the First Amendment.

Beckinsale is excellent – she’s an appealing, empathetic actress who skillfully avoids the melodramatic possibilities of the material. Farmiga’s also great – sexy, confident, and, finally, in a scene in which she learns that her own colleagues are turning against her, heartbreaking. Ultimately, though, their skillful performances can’t save this picture. 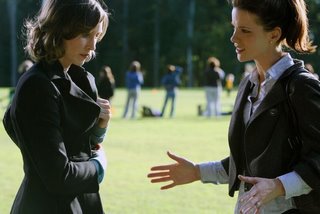 There’s a slogan that was once central to the feminist movement – “the personal is the political.” In today’s Hollywood, almost the reverse is true – “the political must become the personal.” If an idea can’t be presented through a close-up on a major movie star, it’s not worthy of discussion. The final minute of Lurie’s movie really is a jaw-dropping groaner. In one fell swoop he both sentimentalizes his material and obfuscates its relation to current political issues. With Warner Brothers and Akiva Goldsmith reportedly in development on an authorized film based on Valerie Plame’s memoirs, Nothing But the Truth feels like one of those quickie straight-to-video knock-offs that show up in the stores just prior to a studio’s release of some tentpole disaster flick. And what’s worse is the knowledge that if this film fails in the marketplace then that failure will be attributed to the film’s political backdrop and liberal point-of-view, not its generic Hollywood storytelling. I’m kind of hoping that Nothing But the Truth is a success because, if it’s not, the much more interesting story of the real Valerie Plame case will have to wait for a close-up of its own.