THE PLEASURE OF BEING ROBBED IN THIS WEEK’S NEWSLETTER

Every week newsletter subscribers receive an email from us in which we link to key stories from the blog and the website from the previous seven days, highlight various pieces of news and festival deadlines, and in which I write a brief Editor’s Letter. I tend to write stuff that I don’t post elsewhere on the site or in the magazine, and it’s free to join — just subscribe by typing your email address in the box at the left.

I’m posting below the letter from this week’s newsletter as I used it to plug two great movies opening this week. One, Ballast, you’ve heard about as it’s gotten a lot of press. The equally worthy The Pleasure of Being Robbed, which was the Closing Night film at this year’s Director’s Fortnight in Cannes, you may not have. If you are in New York, please see both this weekend! 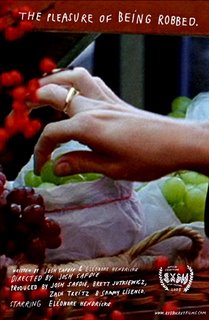 One of the things I’ve discussed quite a bit in this weekly newsletter in recent months is the changing landscape of independent film distribution. Like everyone, I’m interested in how digital downloads and VOD will not only change the way we watch movies but will also change what those movies are. A lot of my friends are purists and romantics about these notions, arguing that the theatrical experience must be preserved at all costs. To be somewhat contrarian I’ve taken to saying that I’d be perfectly happy if the aesthetic satisfaction of seeing a great movie could somehow arrive in my “in” box this morning.

But, having said all of that… I have seen some great movies in theaters recently. The one-two of the Toronto Film Festival and the New York Film Festival have given me one of the best viewing sprees I’ve had in a long time. Just in the last ten days I’ve seen The Class, Summer Hours, Wendy and Lucy and The Wrestler – all fantastic, and all made even more fantastic by having seen them in theaters. Yes, there’s the satisfaction of seeing a film as part of an audience, but for me what’s most important about the theatrical experience is its ability to focus our attention on the film while simultaneously granting us the private social space to allow our minds to wander while we do so.

So since I’m celebrating for the moment the old-fashioned notion of seeing movies in theaters, I’ll urge you to do so twice this weekend as two tremendously important debut films show up in theaters. The first is Lance Hammer’s Ballast, which you can read about in the capsule blurb below. The second is a film I also more-than-highly recommend, and for whatever reason it hasn’t gotten the press attention it deserves. Josh Safdie’s The Pleasure of Being Robbed is a beautiful ode to the joys and irresponsibilities of youth, and it’s inflected with a freewheeling love of cinema that’s reminiscent of the early French New Wave. The film follows the absolutely riveting Eleonore Hendricks as she treats other people’s private property like dazzling baubles to pick up and play with in the toy store of modern life. But to dub her a shoplifter or thief is to miss the point of this exhilarating film, which is an indescribable blend of early Godard, Jacques Tati and the downtown New York cinema of the ‘70s and ‘80s. The film also introduces to feature audiences Red Bucket Films, an imaginative and hardworking collective of young filmmakers who are building up an indispensable catalog of shorts, web videos and, now, features. (Safdie is about to begin his second full-length, which will this time star Frownland writer/director Ronnie Bronstein.)

At the moment, The Pleasure of Being Robbed is only booked in New York. It premieres at the IFC Center on Friday and is scheduled for a one-week run. I hope it will play elsewhere in the country soon after, and I understand it will appear on VOD at the end of the month. I give it my highest recommendation – don’t miss it.