"YOU CAN’T CALL IT ‘THESE PEOPLE’" 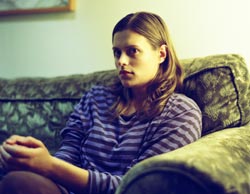 Over in Director Interviews, Nick Dawson interviews Marianna Palka, writer/director of the Sundance Competition film Good Dick, which opens this weekend in Los Angeles at the NuArt and then rolls out to other cities around the country. (New York opens next weekend at the Sunshine.) In it she explains the title, saying, “It’s like titling a poem or something. You have to title it, you can’t just call it ‘These People.'”

Filmmaker: The film tackles the subject of dislocation and the difficulty of connecting with people in L.A.

Palka: Right, and everybody’s so isolated in their car. The way that he meets her is so similar to what people are going through every day here. People are walking on the street and they don’t know where they’re going, and I always wonder about those stories of the people who are walking. Because if you don’t have a car in L.A., you’re kind of lost. I think if I’d moved here and I didn’t have the friends that I have, I’d have left.

Filmmaker: Where did your ideas for the characters in the film come from?

Palka: Well, I would go to Cinefile, the video shop which is a real place in Santa Monica, and I would rent videos from there. The guys in there would sit around, eat food and talk about films; they’re kind of like librarians, but also keepers of the kingdom, in the sense that they just know everything about every film that was ever made, good and bad. They can talk to you about a Fellini movie the same way that they can talk to you about a kitsch, weird, bizarro film that nobody’s ever seen except them and their friends, so I got the idea all of a sudden that it would be so funny if a girl came in and rented from their erotica section. I was thinking that would rock their world, so that’s where the idea for the movie came from. And then I started to write and research the film and I started to rent erotica, because I was going, “What is this exactly? What kind of movies would she rent?”