How To Survive A Plague | Director, David France 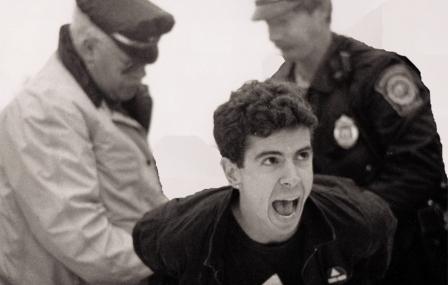 It’s a quirky, but not inconsequential, fact about HIV that the virus made its hideous debut in medical journals just a few months before the first camcorders hit the stores. In the long years before the Internet, before cell-phone cameras or social networks, these low-cost marvels democratized the power of moving images and built the first bridge between mass media and previously hidden worlds. Thus was born the Sex Tape, of course. But the world where AIDS first struck was also a hidden world. It’s hard to fathom now, but the plague barely merited headlines for years and years. Even later, what attention it got was steeped in pity or panic, while ignoring the fierce response AIDS gave rise to – in the shape of activism, creativity, community, compassion, humanity, and love.

So from necessity and with the luck of technology, early AIDS advocates became the very first social movement to shoot a world the dominant culture was ignoring. The most intimate and epic story of the plague years in America – as witnessed by the people most affected – was preserved in tens of thousands of videotapes, most of which have still never been widely seen.

I have never made a documentary before. Being a print reporter and author who has covered AIDS since the start, I had been searching for a way to tell the overlooked story of a community’s resilience and heroics. Then I recalled the ubiquity of those cameras, and realized the unique opportunity they presented for telling the story of those years.

That’s how I began my three-year search for the footage. Across the country, I found tapes scattered in basements and under beds, in storage bins and closets. It was detective’s work. In each new tape I could spot other people with cameras, whose archives I would then try to locate – a task made more difficult by the fact that so many had themselves died of AIDS. Ultimately, I compiled a tape trove of 700 hours from 30 independent shooters or their estates.

Those assembled cartridges, it turns out, held a remarkable and unknown story of how a small group of New York City patients and their advocates revolutionized the healthcare system to bring about the drug breakthroughs that stopped HIV from being an automatic death sentence. They literally saved millions of lives.

In verite style, and with multiple camera angles, How To Survive A Plague was able to piece together their stories as a sweeping medical thriller spanning the years 1987 to 1996. No other film has captured the visceral feeling that enveloped New York then – nor could one. This is what the plague really looked like. It was steeped in suffering, sure, but also kindness, humor, tenacity, and one of the most stunning displays of human reinvention and perseverance the world has ever witnessed. It seems incongruous to say it, but a lot of good has come out of the AIDS epidemic – much of it thanks to the young men and women whose dazzling stories fill How To Survive A Plague with hope and possibility.

Because of the powerful footage they left behind, this story has special resonance today. It provides an insider’s view of how an incongruous coalition of ordinary people can organize themselves into a towering force capable of toppling the most intractable barrier – whether a virus, a dictator, or economic injustice.