The first wave of Sundance selections has just been announced by the festival with this list of filmmakers who will appear in the fest’s New Frontier program. (Congrats to Filmmaker contributor Mike Plante, whose Lunchfilm series made the cut!) Said Sundance programmer Shari Frilot, “New Frontier is best understood both as a physical space and a metaphor for discovery. It is a convergence of art, film, and technology where creative alliances are formed around innovative methods of cinematic storytelling, and where audiences are drawn in to a story through visual, aural, and tactile stimuli.”

This year’s films and filmmakers are as follows:

AGENCY OF TIME, PART 1B (Artist: Leighton Pierce)
Mesmerizing and transporting, Leighton Pierce’s installation work employs film, video, photography, and sound to create experiences in transformative time. In his multichannel installation, Agency of Time, painterly animations are created from long exposure photography. The animations are then projected onto various surfaces that engage with the architecture of the space to create a moving image environment that evokes the awareness of perception, point of view, time, desire, and memory.

THE CASTING (Artist: Omer Fast)
In Israeli born artist Omer Fast’s emotionally moving four channel installation, The Casting, a U.S. Army sergeant recounts two incidents: a romantic liaison with a young German woman who mutilates herself and the accidental shooting of an Iraqi. The two tales are seamlessly woven together into a script which was given to actors to perform in silent tableaux. The Casting, which won the 2008 Whitney Biennial prize, artfully reveals how both memory and cinema arbitrarily remix emotions, images, and words to create our connection to a moment and how the remix might serve to orient, or disorient us in our lives.

“endless pot of gold cd-rs” (Artists:Nasty Nets)
Nasty Nets is an international ensemble representing 25 of the most active artists working online today. Their work both celebrates and critiques the Internet by employing original and appropriated imagery and audio, animated gifs, YouTube hacks, html cheat codes, and other found/edited material. Each of these elements offers a humorous and poignant take on contemporary, digital visual culture. The public is invited to this event to create visual mischief on the internet at Nasty Nets: Night of a Thousand Megabytes, a Saturday late night digital art making jam at New Frontier on Main (RSVP by 8 pm Friday, Jan. 16 to NewFrontierRSVP AT sundance.org). 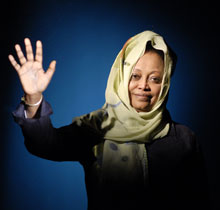 In this profoundly evocative work, the viewer enters a dark room to learn about the stories of women who have survived war zones. The viewer can walk up to a threshold in the room where a moment of video meeting is made possible. In creating Evolution of Fearlessness, Australian artist Lynette Wallworth filmed portraits of several women residing in Australia but originating from countries such as Afghanistan‚ Sudan‚ Iraq, and El Salvador. They are women who have lived through wars‚ survived concentration camps, or extreme acts of violence. Built around the importance of gesture‚ Evolution of Fearlessness enlists its interactive structure to link us to the living women contained in the piece. 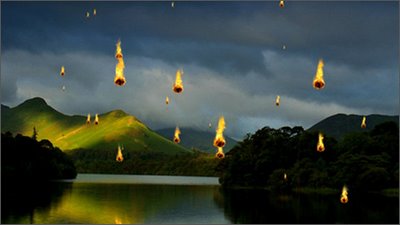 U.K. based artist Kelly Richardson uses cinematic language to create part real/part imagined landscapes which offers a wavering hybrid of fact and fiction that are visual metaphors for our modern reality. A daily rotation of three single channel works encourages the viewer to fill in the blanks of each story. In Twilight Avenger, a stag radiates in the dark and in Wagon’s Roll the viewer is presented with a suspended car mid flight off of a cliff’s edge. In Exiles of the Shattered Star, a bucolic countryside is disrupted by other worldly elements showering down from a distant place.

IJ CENTRAL; ADOPT LINKS; DIGITAL DIASPORA (Artists: The Bay Area Video Coalition (BAVC) Producers Institute Fellows, Paco De Onis, Deane Liam, and Thomas Allen Harris)
The Producers Institute for New Media Technologies at BAVC is a residency program for independent producers to develop and prototype a multiplatform, interactive project informed by a social justice documentary. The participants adapt their content for video game applications, media rich maps, interactive timelines, mobile streaming, virtual communities, and social media networks. This special presentation will spotlight three works: IJ Central, by Paco De Onis, producer of The Reckoning: The Battle for the International Criminal Court; AdoptLinks, by filmmaker Deanne Liam, which is based on her upcoming feature, Precious Objects of Desire; and Digital Diaspora Family Reunion, by Thomas Allen Harris which is based on his upcoming feature documentary, Through A Lens Darkly: Black Photographers and the Emergence of a People.

LUNCHFILM: FILM BEFORE FOOD (Filmmakers: Various independent filmmakers)
Truly independent films are made from the gut. Mike Plante’s Lunchfilm concept is basic: a filmmaker is taken out to lunch and in exchange, the filmmaker agrees to make a short film. The budget– the same cost as the lunch. A contract is drawn up on a napkin and includes both rules and ideas for inspiration. At times poetically real or languidly artistic, the resulting Lunchfilms offer a variety of stunning tastes.

THE WORKS OF MARIA MARSHALL (Artist: Maria Marshall)
London based artist, Maria Marshall’s disturbing and gorgeously composed video projections provoke the psychological dimensions of cinema. Often violent and always visually charming, Marshall has made more than 35 installations and frequently uses her two sons in the main roles. Marshall’s work tackles the fundamental subjects of motherhood, socialization, and life experience and takes us back to the world of childhood as a pretext in order to evoke the anxiety of adults. Hypnotic in effect, Marshall’s films employ digital technology to create disturbing images such as a video portrait of her young son smoking, or a piece in which Marshall’s skin literally crawls.

MOON THEATER (Artists: Nova Jiang and Michael Kontopoulos)
Nova Jiang and Michael Kontopoulos have created a playful interactive work that allows audiences to get their hands on the moon! Moon Theater uses interactive shadow-play and high tech magic to transform hand shadow puppets which are then projected onto a large floating moon. Moon Theater is designed to address issues of scale and social performance in a public setting.

MOTHER + FATHER (Artist: Candice Brietz)
Candice Brietz‘s media installation, Mother + Father, appropriates a cast of iconic actors from Hollywood blockbusters in the service of examining our popular notions of parenthood. In an energetic and insightful orchestration of gestures, tears, laughter, and guffaws, twelve actors passionately perform the rites of motherhood and fatherhood across a twelve channel plasma installation. Breitz offers us parenthood as a metaphor for the relationship between star and fan, and invites us to reflect on the formative role that cinema increasingly plays in our lives.

PROVOCATEUR (Artists: Michael Portnoy )
Performance artist Michael Portnoy’s long standing investigation of social exchange, along with the rules of communication and play, has led him to create the television show Provocateur for Ovation TV. It is there that art, performance, and conversation collide. Guests will be chosen from the Festival community for their capacity to challenge status quo– pushing work and perception to the edge. Episodes of Provocateur will be filmed daily at 4:30 pm January 16-21, in front of a live audience at New Frontier on Main.

STINGRAY SAM (Filmmaker: Cory McAbee)
Cory McAbee is a well known Sundance alumnus having written and directed The American Astronaut, which screened in the Dramatic Competition of the 2001 Sundance Film Festival. This year’s film Stingray Sam presented at New Frontier on Main reunites Stingray Sam (McAbee’s alter ego) on a dangerous mission with his long lost accomplice, The Quasar Kid. Follow these two space-convicts as they earn their freedom in exchange for the rescue of a young girl who is being held captive by the genetically designed figurehead of a very wealthy planet. Featuring music by American Astronaut and narrated by David Hyde Pierce,this musical space-western is a6 part mini series designed for screens of all sizes.

TAMPER (Scientists: John Underkoffler and Oblong Industries)
In the film Minority Report Tom Cruise wears gloves that grab and move computer images in space. The consulting scientist who invented the technology for the production has now developed it into a full fledged operating system. New Frontier is proud to unveil this new media technology that may very well revolutionize the way we edit film. TAMPER provides an editing room of mild derangement where visitors become cinema collage artists, using their hands directly to grab and recompose film elements such as characters, props, architecture, captured from different movies.

WE FEEL FINE and UNIVERSE (Artist/Computer Scientists: Jonathan Harris and Sep Kamvar)
Jonathan Harris and Sep Kamvar’s work combines elements of computer science, anthropology, visual art, and storytelling. Using the metaphor of an interactive night sky, Universe presents an immersive environment for navigating the world’s contemporary mythology as found online in global news and information. Each person’s path through Universe is different, allowing each of us to find our own constellations, based on our own interests and curiosities. We Feel Fine is an exploration of human emotion on a global scale. Every few minutes, We Feel Fine takes sentences that include the words “I feel” or “I am feeling” from all blogs that have been published in the last few minutes, and visualizes them in six different movements that allows viewers to see what any part of the world is feeling at any given moment.