Conflict-of-interest note: As most of you know, I produce films in addition to editing Filmmaker. Others on our team do as well. “By filmmakers, for filmmakers,” our marketing tagline has long been, and I like to think that our experience gives the magazine insight as well as strong bullshit detector. Being aware of my multiple hats, however, I generally exclude projects I produce from the magazine and site. That’s why you’ve never read about films like Off the Black, Saving Face and Raising Victor Vargas in Filmmaker. (Sorry, directors!) But when it comes to the following story of interest to independent filmmakers, I’ll make an exception because it would be wrong to not cover it and disingenuous not to acknowledge my own films in this mix. Hopefully by adding my own experience I add something to the story. And if anyone wants advice on re-delivering 20-year old films, tracking down analog materials, and finding contracts that never existed as PDFs, don’t hesitate to ask.)

When Tom Noonan decided to title all his films beginning with the letter “W”, he wasn’t thinking of the digital era. I remember Tom explaining to me at the time that by calling his three features What Happened Was…, The Wife and Wang Dang they’d all naturally group together on the shelf at the local video store.

Well, those video stores are near extinct, and now we have digital storefronts, VOD menus, and DIY distribution articles urging filmmakers to title their movies beginning with the letter “A” to ensure upfront placement.

The “’W’ issue” is one of the reasons — not the most significant one, by any means, but definitely one that was considered — we decided to re-release Tom’s first two features through Sundance’s Artists Services initiative and its exclusive aggregator, New Video. Both films are what are known as library titles, having originally been released in the early and mid-‘90s. They both premiered at Sundance, in Competition, where What Happened Was… won the Grand Jury Prize and Waldo Salt Screenwriting Award. The Sundance awards were instrumental in sealing a distribution deal with the Samuel Goldwyn Company for What Happened Was, and now the Sundance imprimatur is key for us in raising awareness of these titles in an increasingly cluttered distribution landscape. 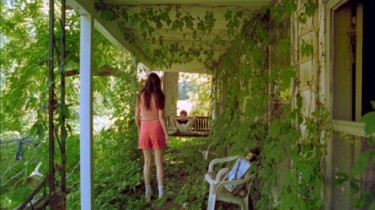 Indeed, leveraging the Sundance brand on behalf of its filmmakers is central to the mission of the Artists Services program, which was formally announced at last year’s festival. Commented Sundance Institute Executive Director Keri Putnam, “We are truly excited for these films to reach the leading digital platforms and storefronts for movies. We created Artist Services so films that have shown at the Sundance Film Festival or been part of our Sundance Institute Labs will have a chance to find their audiences and fan bases. Audiences now have a chance to connect with exciting independent work using the devices and services they already love.”

The power of the Sundance brand has already been evidenced by the significant publicity generated on behalf of these 13 titles so far. The launch of these films timed to the festival was the subject of a lengthy John Anderson piece in the Sunday New York Times. Anderson’s piece crucially explains another appeal of this distribution, which streamlines the process independent filmmakers undergo to commercially launch their films themselves. From the piece:

The New Video initiative, underwritten by the Bertha Foundation, is potentially a sea change for independent film distribution, which has undergone dramatic developments in recent years, from a tightening of purse strings among traditional theatrical distributors, to myriad variations on D.I.Y. releasing. What has remained constant is a need for filmmakers to be salesmen. But artists are not always natural businesspeople.

“We like the idea of creative marketing, but it’s not for everyone,” said New Video’s co-president Susan Margolin, referring to strategic rollouts and other distribution options. “Some filmmakers just want to move on to their next project and say, ‘Take this, New Video, I’m off to Tanzania to shoot.’ ” The point, said the Sundance Institute’s executive director, Keri Putnam, is to advance what Sundance sees as its founding mission: nurturing talent, then getting the work in front of an audience.

“We didn’t want to be a distributor ourselves,” Ms. Putnam said. “What the market doesn’t need is another distributor. We needed to offer a helping hand, to be an access road. We also needed to find a partner who could handle not just the coding and delivery to the platforms that decided to sign up, but also royalty payments, indemnification, a lot of areas our institute doesn’t intend to go into.”

This week I got a tremendous personal charge seeing Tom’s movies hit iTunes, Amazon Instant Video, Hulu, SundanceNOW and YouTube as part of the Sundance Institute’s first wave of releases. Both had gone out of print commercially, and What Happened Was… had never even been released on DVD. The other films I’m proud to be on a slate with are: David Van Taylor’s Advise & Dissent; Lincoln Ruchti’s Chasing Ghosts: Beyond the Arcade; Peter Richardson’s Clear Cut: The Story of Philomath, Oregon; Clay Jeter’s Jess + Moss; Zack Godshall’s Lord Byron; Adam Bowers’ New Low; Diane Bell’s Obselidia; Calvin Lee Reeder’s The Oregonian; Eric Strauss and Daniele Anastasio’s The Redemption of General Butt Naked; Rachel Libert’s Semper Fi: Always Faithful; and Christian Frei’s Space Tourists.

Of the above films, Jess + Moss is a lovely, elegiac ode to sibling relationships, growing up and the emotional power of landscape that is subtly experimental in its use of a mélange of outdated film stocks. I’m embarrassed to admit that I haven’t yet seen Zack Godshall’s Lord Byron, but it’s been hailed by many people I trust, including our friends at Hammer to Nail. This will be the first of these titles I’ll be renting from iTunes. I’m a fan of Adam Bowers’ hilarious dating comedy, New Low, and selected him for our 2010 25 New Faces. Another 25 New Face is Calvin Reeder, a wildly talented director who has honed an original art/horror/exploitation style. He’s on the list with his debut feature, The Oregonian, which stars True Blood’s Lindsay Pulsipher. Eric Strauss and Daniele Anastasio’s The Redemption of General Butt Naked was one of our nominees this year for the Filmmaker-sponsored “Best Film Not Playing at a Theater Near You” Gotham Award, so I’m especially happy to see it receive this distribution. The film is a queasily fascinating portrait of a murderous African general turned preacher, and the filmmakers boldly keep any possible moralizing at bay. Finally, Rachel Libert’s Semper Fi: Always Faithful was a hit at Tribeca this year, where it garnered praise from our correspondent, Stewart Nusbaumer.