SCHAMUS AND SCOTT ON THE APARTMENT 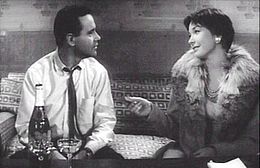 I’m late catching up to some of the things that have been bouncing around the blogosphere, but here the New York Times‘ A.O. Scott has a nice video essay on Billy Wilder’s The Apartment, which is dubbed “a brilliant alternative to classic holiday films” and one that ends on New Year’s Eve. (I wish these great Times video pieces were embeddable — I get that they have to increase traffic, but I’d so love to post them.)

The Apartment was also selected by producer, screenwriter and Focus Features CEO James Schamus as part of a series on the FilmInFocus site in which Focus employees pick their top holiday pictures. Here’s what Schamus had to say:

Somewhere between the inevitable It’s a Wonderful Life and the creepily campy Ernest Saves Christmas there is a perfect holiday movie for the whole family – one that will keep both the smirk on your teenager’s face and the tears flowing from your in-laws’ eyes. That movie is Billy Wilder’s 1960 masterpiece, The Apartment. Not a classic Christmas movie, you say? Look again.

The action takes place primarily from Christmas Eve to New Year’s Eve, with moments that sum up to perfection the Christmas spirit according to Wilder: the despicable Sheldrake (played with greedy zest by Fred MacMurray), handing his downtrodden mistress, Fran Kubelik (Shirley MacLaine), her present, a crisp $100 bill; the prolonged Christmas Eve-to-Christmas Day sequence, in which Buddy Baxter (Jack Lemmon, above) finds her, overdosed on sleeping pills, at his apartment and, with the help of his next-door neighbor, force-feeds her coffee and slaps her repeatedly to keep her from collapse; and, most memorably, Sheldrake on the phone in his White Plains house, his children playing with their new toys around the Christmas tree in the background as he heartlessly hears the news of his mistress’s suicide attempt. When Fran finally dumps Sheldrake and races back to Buddy’s apartment on New Year’s Eve, she hears, just as she reaches the door, the loud retort of a suicide shot – only to discover that the sound was Buddy, alone, popping open a magnum of Champagne.

For anyone who has ever been tempted by either the gun or the bottle at the prospect of the enforced joy of the holidays, Wilder’s movie is the perfect tonic. In the end Ms. MacLaine, cutting a deck of cards, delivers the movie’s final line in both wry acceptance of Buddy’s babbling protestations of love and as sage advice to the rest of us enduring the mandatory festivities of the season: “Shut up and deal.”

Click on the link above for the rest of the Focus series.