OUTSIDE THE (WHOPPER) BOX 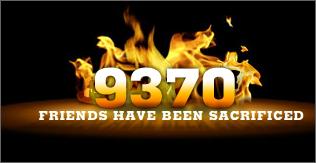 It’s a common problem for anyone who joined Facebook some time ago. You look at your friend list and wonder who these people are.

Burger King wants to help consumers do something about it.

The fast-food chain has released the Whopper Sacrifice application on Facebook. The app rewards people with a coupon for BK’s signature burger when they cull 10 friends. Each time a friend is excommunicated, the application sends a notification to the banished party via Facebook’s news feed explaining that the user’s love for the unlucky soul is less than his or her zeal for the Whopper.

The effort crafted by Crispin Porter + Bogusky came about after agency creative staffers confronted the too-many-friends scenario themselves on Facebook.

“We thought there could be some fun there, removing some of these people who are friends [but] not necessarily] best friends,” said Jeff Benjamin, executive interactive creative director at Crispin, and friend to 736 on Facebook. “It’s asking the question of which love is bigger, your love for your friends or your love for the Whopper,” he said.

The app also adds a box to user profile pages charting their progress toward the free burger with the line, “Who will be the next to go?”