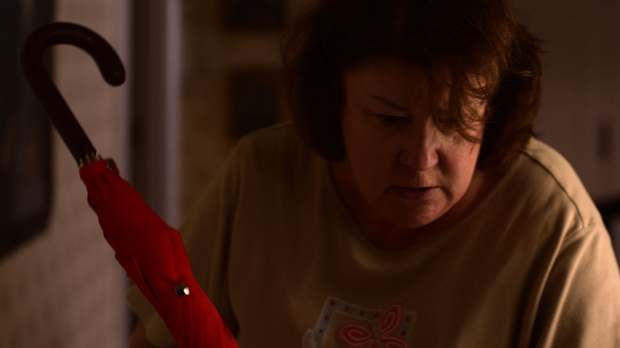 by Brandon Harris
in Director Interviews
on Jan 26, 2012

Zack Parker’s Scalene is a small midwestern gem of a psychological thriller, with several moments that are as shocking as any that will find their way to commercial movie screens all year. Parker and his co-writer, longtime collaborator Brandon Owens use two storytelling devices that have gone in and out of vogue — out-of-sequence and multiple-perspective recounting of events — to marvelous effect. Shot in the filmmaker’s home state of Indiana, it is a heady and tragic mind bender, one that has been unduly overlooked by the major American fests while having had a long run on the regional circuit.

The film opens with Janice, expertly played by Margo Martindale, character actress extraordinaire, in her first starring turn after winning an Emmy for her role in FX’s Justified, arriving at the suburban home of Paige (Hanna Hall, who once played Forrest Gump’s daughter) and brutally assaulting her. The film then jumps back in time to the past, where we slowly learn what caused this horrific event. As we learn over the course of the next hour-and-a-half, it is Janice’s disabled son Jakob (Adam Scarimbolo) whom Paige had been hired to watch over, who is the source of the trouble. Parker coaxes fantastic performances out of Scarimbolo and especially Martindale, whose anger and heartbreak are palpable from the film’s earliest moments.

Scalene is Parker’s third feature, following the 33-year-old director’s Inexchange (2006) and Quench (2007). It finishes its run at the Brooklyn’s ReRun Gastropub Theater this week. 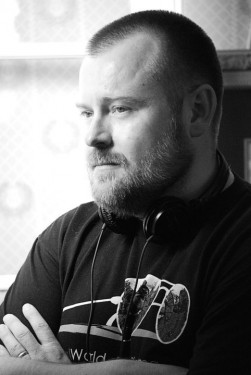 Filmmaker: What provoked you to tell this brutal and bleak story in such an unusual, structurally sophisticated way?

Parker: The idea came about on two fronts. This is my third feature. It came about because of the response to my other two, which were quite polarizing among critics and audiences. There were people who really responded favorably to the films, and then there were some who truly hated them. On Netflix and IMDb you would see people saying these are the worst movies ever made. I was just sort of taken aback by how polarized and drastic the reaction to them was. It really got me thinking about perception. I’d never really seen a film about perception before. There are plenty of films about perspective, about how one can see different sides of the same story, how one character can see something another character doesn’t see,  but not a lot are made about how people actually experience certain events. If you get a group of people together who’ve seen an accident, all of them are going to have a slightly different recollection of what they just saw. I felt like I had never see a film about that before.

Number two, when I step out to make something I’m always trying to make something that I haven’t seen before. There have been several films to come out that are told in reverse, such as Irreversible or Memento , and they really get you thinking about the structure of storytelling. Structurally, there are really only three forms of storytelling: linear, non-linear and reverse. I had never seen all three incorporated in one film before. I was already playing around with this idea of  story told from three different characters points of view, so it seemed appropriate to use all three different forms of storytelling in this film.

Filmmaker: Did choosing the tell the story this change your process as a writer?

Parker: Not really. This is the first film I co-wrote with someone else. I co-wrote it with Brandon Owens, who is a friend of mine I’ve been making movies with since middle school. I had been thinking about what I wanted to do next, and obviously I was still dealing with the reaction to the other two. I was driving up to Chicago in order to drop off some equipment from another shoot and the whole idea kind of came to me on the drive there. About 70, 75 percent of the story came to me on that drive. It’s about a five-hour drive, and I started to think about a woman who has a son who’s mentally challenged. She’s his full-time caretaker, and it all evolved around this alleged rape that happens, the telling of the story in different forms, etc. So when I got back, I called him and told him I had this idea for a movie but it’s going to be incredibly complicated. I really wanted to have somebody else to bounce ideas off of and go back and forth with because it’s such a complex story to tell. Then we were off and running. It took us about eight or nine months to write it.

Parker: Right. Relatively speaking we did not have a big budget, yet relative to other independent films in the midwest, we had the largest budget for a film to come out of here in a while. I had a Executive Producer come on who is the president of several different radiology departments throughout the area. He loves movies and clicked with our taste. He came in at the last minute to help us financially on the last movie, and he was around from the beginning on this one. He introduced me to the world of physicians in the area. We were about eighty percent financed by physicians. Now I’ve become friends with all these people, and our kids play together and we go to the same play dates and schools. I’ve been sort of immersed in that community for a few years now. It’s sort of going through this whole explanation process of “I’m making this film, and here’s what its about.” Attaching some of the actors was, I think, key, because they could recognize them from pretty iconic films. I find it’s easier to raise financing for independent films in the midwest than it might be in New York, L.A. or Chicago because the opportunity doesn’t come around here very often. I was perceived by them as someone who had two films already out; they could go to the video store locally and see the films, they’re on Netflix and Amazon, so it seemed to them to be a legitimate investment endeavor.

Filmmaker: So you got Margo Martindale and some of the other actors involved before you put together the financing?

Parker: Absolutely, although I’d say the casting and the financing kind of ran parallel to one another. I have a casting director in L.A. who I’ve known for awhile. She almost cast our last film but it didn’t work out. Still I would cc her on all our reviews and keep her abreast of what was going on. I sent her a copy of it and she really liked the way it turned out. She finally saw it, liked it, and wondered what I was working on next. I told her about the script and how I was almost done and how I really wanted to go after some bigger people this time. So she took a look at it and she really loved it immediately and was enthusiastic about it assumed we had no money at the time. She said she’d try to help us get it packaged a bit and began the process of kicking it around all the bigger agencies. Meanwhile I was talking to people back here about financing the film.

Margo was somebody I had in mind from the very beginning. Her resume is astounding, and she’s just this brilliant character actress. She and Adam and Hanna are not these standout, bankable names with whom you’d normally be able to get financing from, but in a place like this, they are. If you can talk about films like Million Dollar Baby and Forrest Gump, people know those titles. The perception of the film world here is that it’s another planet. It just seems out of reach when you’re from a small town in the midwest. For them to feel like they have some sort of involvement in that world is exciting to them. It was enough for them to want to invest. Also I think that people were intrigued by the story.

Filmmaker: Was it difficult guiding your actors through what was clearly going to be a formally challenging film? There aren’t not easily discernible character arcs for each one of them because they change so much depending on whose side of the story you are telling.

Parker: Well there’s never enough time on an independent film set. You can never be as thorough as you’d like, so they had to have a lot of trust that I knew what I was doing and it was going to come out right in the end. There was a lot of running and gunning. For instance, the scenes at the beginning and the end when she’s in the bathroom with the gun — those were actually shot in two different bathrooms on several different days when the other actor wasn’t even present. I think the most difficult thing in working with the actors was to try to remind them that they were actually playing three different characters in the film, depending on whose story they were inhabiting in the film.

In many ways, I wanted this film to reflect how we all think we are the heroes of our own stories, the protagonist of our own worlds, so the way Margo perceives herself in her own story is going to be different than how Hanna perceives Margo’s character in Hanna’s story. I wanted to shift the performances slightly depending on whose story we were in. There would be days where Margo would come to me and complain, “Well, I feel like I’ve been a bitch all day,” and I would explain that that was because we were doing all of Paige’s story today. In your stuff, you become the sympathetic character. Keeping those performances under control and modulated for each part of the story was the most difficult part.