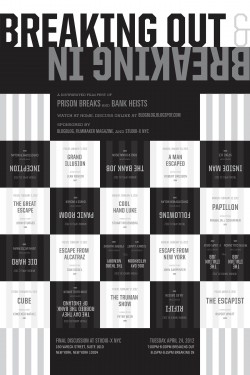 “A “distributed film festival” is what BLDGBLOG’s Geoff Manaugh is calling “Breaking Out & Breaking In,” a series of screenings and discussions centering around cinematic prison breaks and bank heists. Or, more accurately, the festival is about space — the architectures of these films’ settings, and the varying space between you and other viewers as you watch at home, discuss online at BLDGBLOG, and then venture to Studio-X in New York City for a panel discussion on April 24. “Breaking Out & Breaking In” is sponsored by BLDGBLOG, Filmmaker and Studio-X NYC, and it begins tomorrow, Friday, January 27, with Jean Renoir’s Grand Illusion.

Here, from BLDGBLOG, is a description of the festival:

Breaking Out and Breaking In is an exploration of the use and misuse of space in prison escapes and bank heists, where architecture is the obstacle between you and what you’re looking for.

Watch the films at home—or anywhere you may be—and then come back to discuss the films here on BLDGBLOG. It’s a “distributed” film fest; there is no central venue, just a curated list of films and a list of days on which to watch them. There’s no set time, no geographic exclusion, and no limit to the food breaks or repeated scenes you might require. And it all leads up to a public discussion at Studio-X NYC on Tuesday, April 24.

The overall idea is to discuss breaking out and breaking in as spatial scenarios that work as mirror images of one another, each process with its own tools, techniques, and unique forms of unexpected architectural expertise.

How do prisoners and burglars reinterpret the built environments around them? Where does this more aggressive understanding of space differ from the constructive insights of an architect—and how can a building be strategically unbuilt so as to get at what lies on the other side? What particular kinds of spatial and temporal knowledge—where to tunnel, when to go—do these other users of buildings need to develop?

If burglary and prison breaks each require a kind of counter-manual of the city, then what might such a guide include—from precise time schedules and blindspots to the limits of surveillance—what points of weakness and unexpected parallels should it map, and what typologies of incisions or perforations would it posit to allow new routes through closed spaces?

The escape and the break-in here are both about illicit reinterpretations of space, sometimes violent, sometimes simply used against the grain, operating a building, we might say, in every way the architect—and the guards who police his or her creation—regrettably overlooked.

Conversely, how is space regulated and maintained from the standpoint of the police and the prison guard, or from the point of view of the homeowner who seeks to hide his or her private riches? What obstacles, blockades, misdirections, decoys, safe rooms, and security systems must be implemented to ensure that a given space is properly accessed?

These are all recurring themes here on BLDGBLOG, where, over the years, we’ve discussed how to plan the perfect heist and how to perforate a skyscraper, as well as how to worm your way through the interlinked foundations of London; and perhaps we might say that 19th-century architect George Leonidas Leslie, who used his spatial skills to become “the head of the most successful gang of bankrobbers known,” is, in a sense, our festival’s mascot or patron saint.

Over the next four months, we will be discussing these questions and many more—from how certain sequences in these films were shot to the stage sets constructed to produce them—culminating in a public event at Studio-X NYC in April.

Of course, not all of these films are escapes from prisons as such or heists specifically aimed at banks; instead, we’ll explore what it means to break out from an overly managed suburban life in The Truman Show and how an elaborate home invasion goes wrong in Panic Room; we’ll watch the perfectly timed dream-physics kicks and corporate secrets of Inception as well as a team of German terrorists robbing the vaults of the Nakatomi Building of its negotiated bearer bonds. And our list is by no means exhaustive, with some films chosen less for their cinematic quality or the depth of their characterization than for their discussability or the originality of their spatial propositions.

So, in order of viewing, this distributed film fest of prison breaks and bank heists includes:

Again, you can watch the films wherever you might be, from the Lower East Side to Rotterdam, from Toronto and Mumbai to Beijing, and then join the relevant comment threads here on BLDGBLOG (posted, I hope, within a day or two of the screening date). Further, look out for some original analyses on Filmmaker Magazine as the festival unfolds.

Finally, stop by Studio-X NYC on the evening of Tuesday, April 24, for a free public discussion featuring a stellar group of panelists soon to be announced.

I hope many of you will participate in this experiment in film curation!