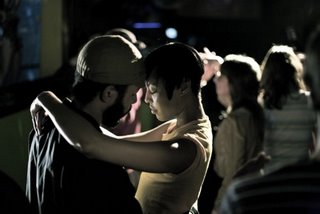 Congrats to director Barry Jenkins and stars Wyatt Cenac and Tracey Heggins — their film, Medicine for Melancholy, featured on the cover of the new Filmmaker, scored the #1 spot on the Indiewire per-screen average chart this weekend. Writes Peter Knegt, “IFC Films’ one-screen debut of Barry Jenkins’ Medicine For Melancholy narrowly led all per-theater-averages this weekend, according to estimates provided this afternoon by Rentrak. Its $14,700 haul from New York’s IFC Center became the best opening for a 2009 limited release so far, and beat out Laurent Cantet’s The Class in its first week of release outside of December’s Academy run.”

I moderated the Saturday night first-show Q&A, and I was really happy to see a great turn-out of people who seemed to really like the film and who had tons of questions for Barry afterwards. And although paradigms are changing, specialty film these days still manages to live or die on early theatrical results, so please make a point of checking out this great independent debut when it arrives in your town.